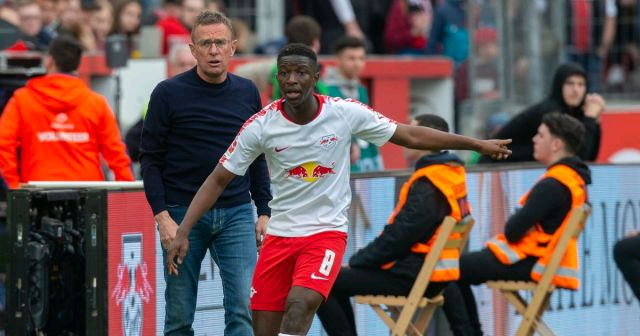 Manchester United may have a roster capable of contending for big prizes this season, but key areas still require reinforcements.

Ralf Rangnick is in interim command until the end of the season and will have an understanding of which areas of the team require bolstering in the January transfer window.

Though United signed Jadon Sancho, Raphael Varane, and Cristiano Ronaldo this summer, Rangnick is unlikely to avoid reentering the market for more stars as he competes in the Premier League, FA Cup, and UEFA Champions League.

Central midfield is one location where United are likely to sign a player. The Red Devils have been linked with a slew of players, from Declan Rice to Frenkie de Jong, and RB Leipzig's Amadou Haidara's name has been spoken more and more in connection with a prospective move.

The 23-year-old has a £32 million release clause and has previously worked with Rangnick, and The Sun is convinced the duo will reconnect in January.

The French winger is out of contract in the summer, and United are looking to steal a march on Premier League rivals Newcastle United, according to the Daily Express.

Rangnick will be familiar with the former Borussia Dortmund star from his time in Germany with Leipzig and will know exactly what he can achieve.

Though he has struggled with injuries in Spain, the World Cup winner is still only 24 years old and a change of environment may help him reach his full potential in a new league.