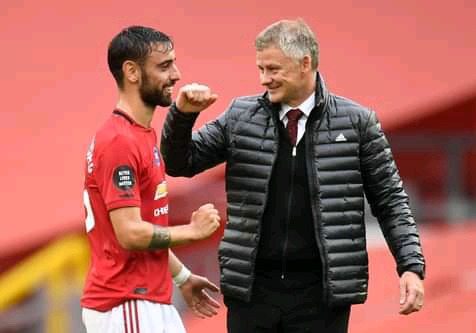 City came into the derby on the back of 21 straight victories, 15 of which have come in the Premier League.

That run means that in all likelihood they will land their third league crown in four years, but this result means there is still a tiny chance of a title battle in the final months of the campaign.

United got off to the perfect start when Gabriel Jesus upended Anthony Martial in the box after less than a minute. Bruno Fernandes made no mistake from the spot, although Ederson did get a strong hand to his effort.

In recent weeks, Pep Guardiola's side have looked unbeatable but the Red Devils showed they were human after all, with a performance filled with attacking intensity.

Luke Shaw doubled their lead in the second half, capping off a brilliant, driving run with an accomplished finish into the corner.

The gap now stands at 11 points and while that mountain still appears too steep to climb, it's a day that Ole Gunnar Solskjaer's methods were firmly vindicated.

Solskjaer’s plan in the big games doesn’t always appear clear, particularly in a season that has seen them be so cautious in the league’s biggest games.

The pace of Daniel James, Marcus Rashford and Martial strikes fear in their local rivals and allows them to play on the counter with break neck speed.

Solskjaer's side played with the kind of attacking intensity that has been severely lacking this season.

With the minutes ticking down in the first half, United could have been forgiven for holding what they had and reassessing their plan back in the dressing room.

But to see five players all running towards goal was a welcome change from the cagey displays that have littered their season to date.

Shaw's driving run and finish was the move that signified the positive mindset that United played with throughout.

Solskjaer seemed to have taken the handbrake off at last and United looked a much more dangerous prospect because of it.

The way Solskjaer has managed Shaw's situation should be admired and everyone - except for Telles - is now reaping the benefits.

Martial was at his brilliant best in the win over City With Edinson Cavani missing out, Anthony Martial was once again given the chance to lead the United line.

It's a position that after thriving in last season, has become a struggle for the Frenchman.

There have been question marks about his future, with critics suggesting an upgrade must be made at the end of this campaign.

But against City, Martial put in the type of performance that will give Solskjaer food for thought.

From a Mean Score of 198 to 279, Story of The Transformation of a Primary School

Weekend Sure Bets to Win You Huge Money

Here Is An Accurate Single Bet To End Your Week With