Manchester United equal the record for the biggest win in premier league history. 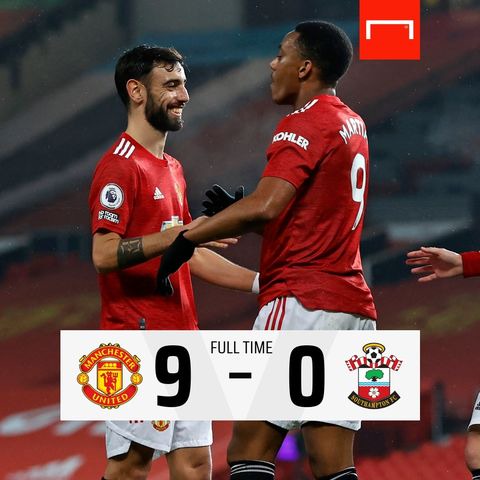 Manchester United are currently on their best form this season as compared to the previous seasons. Currently they stand at position two with 44 points same as their rivals Manchester city, though Guardiola's men have a game in hand. Ole's men had gone for more than 12 games unbeaten until when they met Sheffield United which is in last position with 8 points and gave them a dose of 2-1.

On Tuesday night, 2nd February, Ole Gunnar's men didn't disappoint after they met Southampton at Trafford. The Red Devils mercilessly gave Southampton a beat of 9 goals with response at all for the second time this season, after they were also beaten the same way by Leicester city when the season was still Young.

Southampton got disappointed in the second minute after the game started when Alexandre Jonwaitiz got a direct Red card after he wrongly played against Mctomney. Aroan wan Bissak opened the flow of goals in the 18th minute, thanks to other goals from Rashford, an own goal from Jan Bednarek, Edson Cavan, Martial (2), Bruno Fernandez, Scott Mctomney and Daniel James.

The last time Manchester United won more than 6 goals is when they played against Arsenal in the year 2008 and beaten them 8-2. Meanwhile Ole has broken that record. So far they have equalled the record set by Leicester city by still beating the Same team in a single season.

Content created and supplied by: @Robert (via Opera News )

JUST IN: Sen. Murkomen Reveals Worrying News to Kenyans as he Pleads With Pres. Uhuru For Help