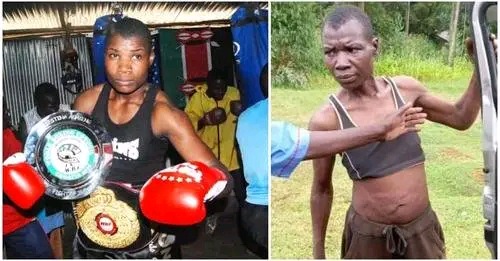 She left her career upon engaging in 27 professional fights. In this, she won 17, lost 6 and was held to a draw 4 times making her one of the richest female boxers in East and Central Africa.

However, her tribulations began when she was diagnosed with paranoid schizophrenia in the year 2012 just after retirement from active boxing.

She was admitted to Mathare Teaching and Referral and her whereabouts remained a secret before she appeared at Nairobi Night fight at KICC in March 2019.

A year later, her friend Carol Radull declared publicly that Conjestina's health was deteriorating but no step was taken by the department of health.

In an amusing action, Conjestina burnt down her residential house on August 2021.

To date, she is said to be in a critical situation which cannot be explained.

"Mum is still very ill and I would like the ministry of sports to assist us treat her," said her son Charltone.

What is your take on this? Kindly give your opinion and share the story.

Details Emerge on Where DP Ruto And Raila Are Currently, What They Are Doing Revealed

Number Of 34A Forms Submitted To IEBC Revealed

Didmus Barasa's agent stopped from picking up election certificate on his behalf.