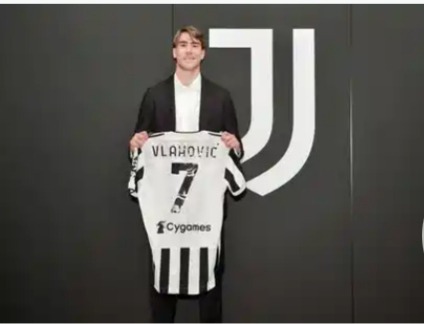 Dusan Vlahovic was yesterday announced as a new Juventus player after passing his medicals at Turin. The 21 year old Serbian International who was a priority signing for Arsenal has been handed jersey number 7 which was previously worm by Christiano Ronaldo.

The player was on top of Arsenal's wishlist but Juventus came late in and hijacked the former Fiorentina's sharp shooter.

After sealing his move with Masimilliano Allegris Juventus, the star striker opened up on why he chose Juventus rather than Mikel Arteta's Arsenal who had prioritized signing the player.

According to the player, his reason of turning down Arsenal proposals is because they are without Champions League football competition. That's the reason that made the Serbian move to Juventus at a reported fee of € 80million.

While speaking for the first time aa a Juventus player, Vlahovic said, "Juventus represents pride, tradition, family. Juventus are always there until the last minute, they never give up.

The team always comes first, I am at the disposal of the coach and my teammates, who I will try to help in the best way possible. I want to make Juventus proud. We will always fight for all goals, as they say, fino alle fine."

Jose Mourinho names the greatest XI of players he has coached