By Annnjeri (self meida writer) | 16 days

Arsenal were among the six clubs from England who had embraced the idea of quitting the champions league to join the parallel european super league which was met with hostility by fans and pundits around the globe.

The football world united in condemning the formation of the league with the founders being treated to fans backlash that led to protests which made the clubs bow to pressure and back down from the idea.

Arsenal supporters however are still not convinced that their owner Stan Kroenke is the man to lead the club forward and have planned to hold demonstrations to demand the tycoon to leave their club. 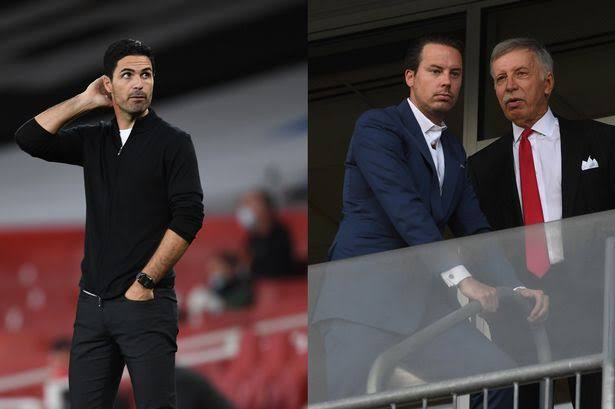 The fan base feel they have been sold out by the Kroenke family who is guided by his own greed rather than making investments in their squad which they argue has been left behind compared to their rivals Chelsea and Manchester city.

Josh Kroenke has now spoken for the first time after the club withdrew from the super league and he has promised the fans they will be making changes in the coming days.

"We will rebuild, we believe we are fit to go forward with AFC, we were put in a difficult situation by sources outside the Club,we have big plans to invest, we have plans, we want to be great again, but a long term model does not support long term high investment. No intention of selling."he said.

Arsenal fans could then have a reason to smile if their is anything to read from Josh's statement as it could be an indication that they could loosen their purse strings to bring in a big name to appease the fans.

Win Big From this 34-Odd Betslip

After Chelsea's Dramatic Comeback Against Man City, This Is Now The New Premier League Standings

"My dream about Chelsea in UEFA has been fulfilled and will be fulfilled," says Hansi Flick

"He works like a dog", Tuchel Praises Chelsea Star Player After Saturday's Clash