By josegachinga (self media writer) | 2 months ago

The club ought to void Cristiano Ronaldo's Manchester United contract, according to former United captain Gary Neville. Ronaldo said he does not respect United manager Erik ten Hag and claimed he is being ejected from Old Trafford in an explosive interview with TalkTV.

Since Ten Hag took over as manager of United in May, the five-time Ballon d'Or winner has played just a supporting role. After declining to replace an injured player in a 2-0 victory over Tottenham Hotspur last month, Ronaldo received a warning.

But his most recent action went even further, accusing the club's owners, the Glazer family, of having "no care" about the team's athletic success. "He knew it would bring the headlines it has and be the end of his Manchester United career." 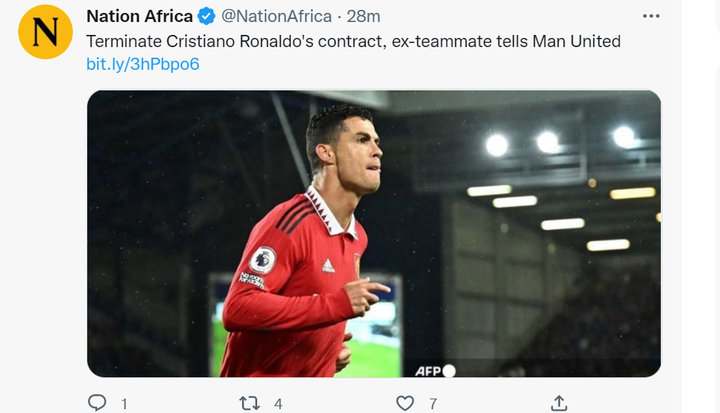 After returning to United from Juventus in August 2021, Ronaldo will have just over six months left on his contract. During his debut season at Old Trafford, the Portuguese player won the Champions League and three Premier League championships. His welcome back has taken a bad turn. Despite Ronaldo's 24 goals in all competitions, United missed out on the Champions League after finishing sixth in the Premier League last season.

"I don't think he wants a way back," said Neville. "He wouldn't have done this interview if he wanted a way back." "I'm wondering what Manchester United are doing because the reality of it is they know they have to terminate Cristiano's contract or they basically open up a precedent so any player can criticize them in the future," added Neville.

United said in a statement posted on Monday that it will "consider its response after the full facts have been established." Ronaldo's banner, though, has already been taken down from the Old Trafford front. In Qatar, the 37-year-old will play in his fifth World Cup. However, Fernando Santos, the manager of Portugal, announced that owing to illness, he will not play against Nigeria on Thursday.

Content created and supplied by: josegachinga (via Opera News )