Manchester United put their Ole Gunnar's miseries by defeating Spanish giants, Villarreal in a crucial UCL match. The two goals put Manchester United in the knockout stage of the competition.

In the first game after Ole Gunnar was sacked Michael Carrick named Bruno Fernandes on the bench while Van De Beek was handed a start.

Villarreal enjoyed more of the possession throughout the opening stages but United stayed compact and hard to break down. The yellow submarine looked the better side in the first half, United stood firm, albeit that was mostly down to David de Gea. The Spanish shot stopper made series of saves that insured that The reds remain on the game.

Manchester United came out in the second half and looked transformed, though, regularly enjoying spells of possession in the final third, which was something they failed to do in the first half and they managed to sit back, soak up the pressure and decide to pin the host on their half. This was also achieved after Carrick made some changes on the hour mark bringing Rashford and Bruno Fernandes in place of Van De Beek and Martial.

Moments later goals on Tuesday night arrived thanks to goals from Cristiano Ronaldo and Jadon Sancho. 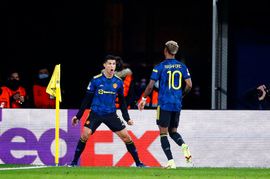 Will Manchester United be transformed with Carrick this season? Share with us your views on the same.

Salah was excluded from FIFA’s best 11 because he is not a European – Former Liverpool Star, Lovren