By BinquizAdijah (self media writer) | 11 days ago

Manchester United have been struggling in winning their matches this season even when playing against some of the small teams in the league due to the formation that the coach has been using which seems to be difficult and yield no better results. If the team needs to win their matches in order to compete effectively this season, the management and the coach should select the best squad that will ensure they emerge victorious. This is the best formation that United can use to become unstoppable this season:

In goalkeeping, David De gea should be given the highest priority since he has been demonstrating a good match starting this season which give him the chance to start in a number of matches that United participate. Henderson should be United goalkeeper number two having demonstrated a wonderful game in the number of matches he featured last summer.

Defenders should be well selected where by Harry Maguire, Raphael Varane, Wan Bissaka and Luke Shaw. Some of the defenders such as Erick Baily, Dalot and Alex Telles should feature in United as tactical substitute when Man U is playing in some other trophies.

Midfield which is a vital sector in every team has to be made concrete and focused hence the manager should select players well. Led by Paul Pogba, Scott Mctominay, Fred, Matic and Bruno Fernandez, the best four players should be upheld to serve as the midfield to ensure the team displays a fantastic match. Scott Mctominay, Pogba and Bruno should be made United best priority because they usually coordinate well while playing together. Fred, Matic and Van der Beek should feature in as tactical substitute when key player is injured.

In forwards, Rashford who is at injury but has returned to training should be used as the left winger, Jadon Sancho as the right winger and Cristiano Ronaldo as the number nine striker. Martial, Lingard and Cavani should feature in from the bench as tactical substitute. 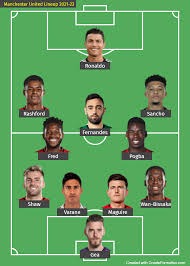 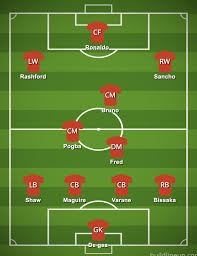 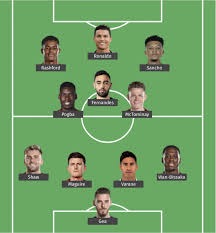 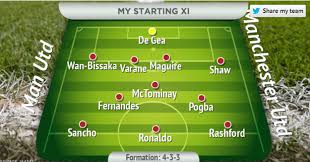 The 4-3-3 formation is always the best for Manchester United.