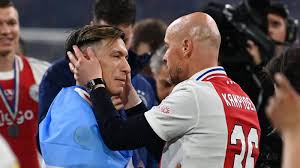 Argentine International and Ajax defender Lisandro Martinez would now prefer a move to Old Trafford over the Emirates, according to numerous reports in Netherlands.

Mikel Arteta's Arsenal have reportedly made three bids for the Argentine international but Ajax want a fee of up to £45 million for the defender. United were keen on making a move for Martinez’s teammate Jurrien Timber but the Netherlands international sought to to stay at Ajax for one more season.

Ten Hag is now hopeful that the club could reach an agreement with Ajax for the defender as Mikel Arteta's Arsenal is more than serious in making a move for the versatile defender. w

The player had expressed an interest in joining Arsenal, however, according to recent reports by De Telegraaf, the 24-year-old has ‘placed his hopes’ on Arsenal rivals Manchester United.

De Telegraaf journalist Marcel van der Kraan reports that ‘big developments’ on Martinez’s future will be made within the next 48 hours. It remains unlikely wether United or Arsenal will win the 24 year-old signature. The Times also reports that United are confident they can lure Martinez to Old Trafford.

When Chebukati Is Expected To Announce The Presidential Winner

Nimewacha Siasa- MCA candidate laments after getting only 7 votes.

Presidential Provisional Results Updates as of 11:45 AM on 11 August

Counties that have not submitted 100% of forms 34A By 11Am Today at the IEBC portal.