By @Statistician (self media writer) | 1 year ago

PSG Ander Herrera and Marco Verratti have revealed that the referee Bjorn Kuipers swore to players from France during defeat to Manchester city. Goals from Mahrez gave Pep a an easy win making it 4-1 on aggregate. PSG players were frustrated in the last minute of the match which saw Angel Di Maria being send off for kicking Fernandihno with several others booked for the yellow card. 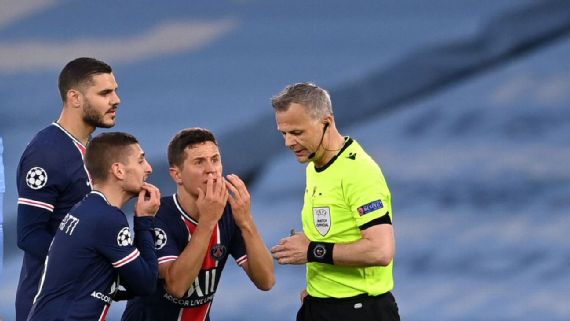 According to Herrera and Veratti,the referee's comments aimed at them were the inauguration of the seen frustrations, "The referee tonight said 'f--- off' to Leandro Parsees," Herrera told RMC. "If we say that we get a three or four match ban."

It was indeed a mountain for PSG players at Etihad. The supposed penalty awarded within ten minutes of play,Kuipers overturned it upon reviewing the VAR. It was just not their day.