Today's Football Coupon To Place on and Make Cash

By KevinGerry (self media writer) | 21 days ago

Panetolikos head into this fixture after a 2-2 Super League tied result vs Lamia.

In their last 6 games, Yannis Anastasiou's Panetolikos have netted a total of 7 times resulting in an average number of goals scored per match of 1.17.

Following on from a loss in their previous game against PAOK in Super League action, AEK Athens will be hoping to turn things around here.

In that game, AEK Athens had 45% possession and 5 attempts on goal with 3 of them on target. At the other end, PAOK got 9 attempts at goal with 4 on target. Diego Biseswar (42') and Jasmin Kurtić (79') scored for PAOK.

During their six most recent matches, Vladan Milojević's AEK Athens have fired home 9 times - earning them the goals per game average of 1.5. 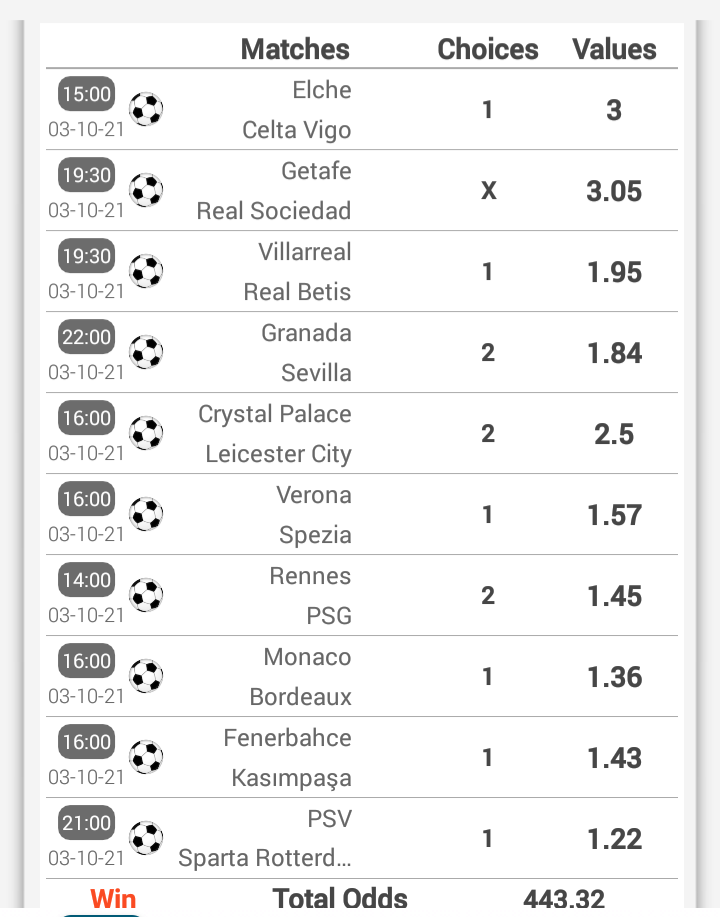 Atromitos will be hoping to return to winning ways here following the 1-3 Super League losing effort in their last game against Aris FC.

In that match, Atromitos managed 61% possession and 10 attempts on goal with 4 on target. The only player on the scoresheet for Atromitos was Srđan Spiridonović (45'). For their opponents, Aris FC got 5 shots at goal with 3 of them on target. Daniel Mancini (10'), Bruno Gama (60') and Mateo García (65') scored for Aris FC.

Over their prior six games, Ángel López's Atromitos have found the net 6 times, an average number of goals per match equal to 1.

In that game, PAS Giannina had 52% possession and 13 shots at goal with 3 on target. The only player on the scoresheet for PAS Giannina was Nicolae Milinceanu (22'). OFI Crete got 7 shots on goal with 6 of them on target. Juan Neira (12') scored for OFI Crete.

Over the course of 6 of the previous six clashes involving PAS Giannina, a notably low volume of goals have gone in between them and their opponents. The overall average goals scored per game in that period is a paltry 1.33, with the average goals for Ajax of Epirus being 0.5.

OFI Crete will play in this match following a 1-1 Super League stalemate vs PAS Giannina.

In that game, OFI Crete had 48% possession and 7 shots at goal with 6 of them on target. The only player on the scoresheet for OFI Crete was Juan Neira (12'). PAS Giannina had 13 attempts on goal with 3 on target. Nicolae Milinceanu (22') scored for PAS Giannina.

Nikos Nioplias's OFI Crete have netted a sum total of 8 times in their past 6 outings. The comparative tally of goals that have been scored against them in those games amounts to 6.

In their previous game, PAOK drew 1-1 in the Conference League tie with Slovan Bratislava.

The only name on the scoresheet from PAOK was Chuba Akpom (9'). André Green (14') scored for Slovan Bratislava.

In 5 of the past 6 games featuring PAOK, a relatively low number of goals have been scored between them and opposing sides. The overall average goals scored per game within that period is a meagre 1.83, with the average goals for Dikefalos tou Vorra standing at 1.33.