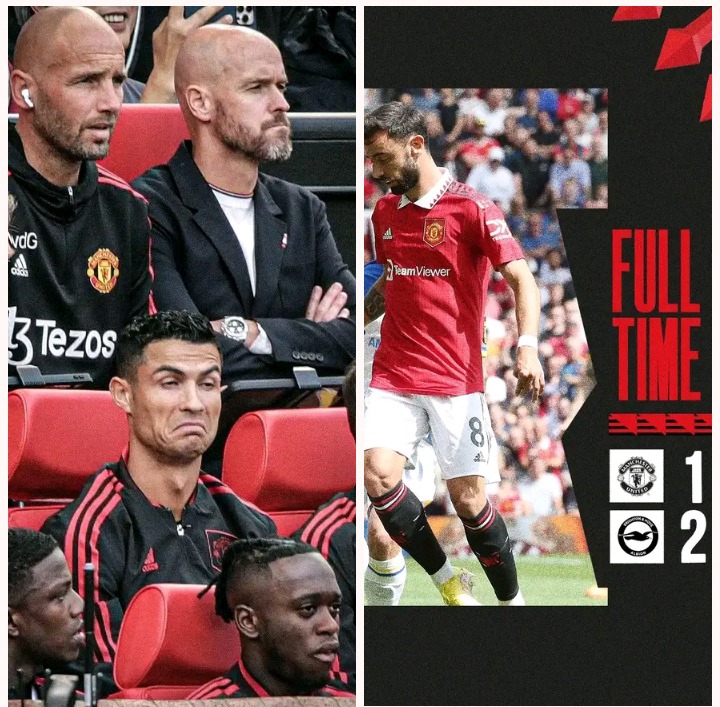 What was believed to be a new revolutionary way of playing football at Manchester United football club under the New Dutch Manager Erik Ten Hag was delt a huge blow after the strongest lineup of Manchester United was beaten by Brighton 2 gaols to 1. The results left the United fans very disappointed.

Fans were heard booing their new Manager Erik Ten Hag for Omitting Cristiano Ronaldo in the starting lineup and singing and chanting Cristiano Ronaldo's name until the former Ajax Manager Erik Ten Hag was forced to introduce the 37yrs old Portuguese centre forward just after the start of the second half. However Ronaldo had no huge impact on the game as he never had a short on target neither did he register an assist.

After the defeat at their hi home ground Old Trafford, Manchester United football club now seats at the bottom of the table with zero points and minus two goals.

Manchester United football club have had a disappointing transfer window as of now as their target man In the middle of the park Barcelona player Frank Dejong is not interested in joining Manchester United.

Things You Should Never Do After Eating

Man Tricks Disabled Woman in His Bedroom, Forcefully Sleeps With Her

"Bomas Choir Didn't Do Anything Meaningful To Me. They Shouldn't Be Paid" Alai Says

Did You Know That There Are Bird Species which Have Been Declared As Pest In Kenya?

How To Know That Someone Has Blocked You On WhatsApp