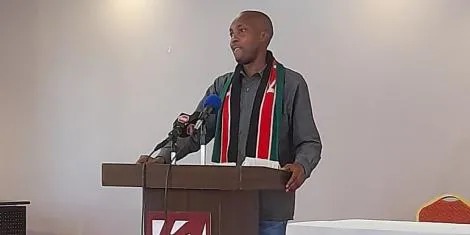 There was drama after sports journalist Milton Nyakundi was attacked by goons on Sunday, 17 October. Nyakundi was giving a press conference in a hotel along Ngong Road in Nairobi, on the country’s state of football.

In particularly, he was addressing the management of the Football Kenya Federation (FKF) headed by embattled Nick Mwendwa.

In his statement to the press, Nyakundi said that all officials at FKF should step aside to pave the way for investigations stating that he was threatened for raising concerns on how FKF was conducting its affairs.

“Most of our colleague journalists were quiet as the FKF leadership steadily presided over anarchy in total disregard for the rule of law and impunity as though they were beyond reproach like Caesar’s wife,” he said, adding that he never lost hope in raising the concerns.

Police drawn from Kilimani Police Station swung into action to restore order, with journalist accusing Mwnedwa of being behind the attack.

“They should face me instead of taking advantage of those Kariobangi and Makongeni youths. I am willing to engage them in a debate and deconstruct their lies on national television and give evidence of how they have plundered FKF money,” stated Nyakundi.

But in a close rejoinder, Mwendwa distanced himself from the attack on Nyakundi.

Last year, Nyakundi addressed a letter to the Sports Registrar Rose Wasike petitioning her to probe the affairs of FKF as contained in Section 52 of the Sports Act.

In the letter copied to the Ministry of Sports Cabinet Secretary Amina Mohamed, Nyakundi wanted FKF boss investigated for alleged gross misconduct and abuse of office.

Mwendwa’s attempts to stop the Directorate of Criminal Investigations (DCI) and the Director of Public Prosecutions (DPP) from investigating him over suspected misappropriation of the federation’s funds were thwarted after the High Court cleared the path for his investigation.

To further add to his woes, CS Amina gave an order to the Registrar of Sports to go ahead and investigate FKF’s accounts.

FKF has been on the spot over how it has been running football affairs in the country, with several footballers, including Former Harambee Stars midfielder MacDonald Mariga faulting the FKF president for causing deterioration of the sport in the country.

“For seven years under his Nick [Mwendwa] leadership, football in Kenya has gone backward and no progress whatsoever and for that, we demand his immediate apology and resignation as FKF boss,” Mariga stated.

Mariga noted that despite players showing immense pride and patriotism, they had suffered further, calling out Mwendwa for saying Kenya has no talented players to compete with other nations.

“We suffered playing under his reign, the players have shown immense pride and patriotism to represent the Kenyan flag in various international assignments and this is what they get in return. I’m appalled by Mwendwa’s sentiments made on live TV that Kenya has no talented football players to compete with other nations,” he stated.