By MiriamChemutai (self meida writer) | 16 days

The Real Madrid forward was reunited with his Chelsea teammates during the UEFA Champions League semi final competition first leg on Tuesday night as the Belgian made a substitute appearance. The 30 year old star left Chelsea on 2019 after completing his permanent move to Real Madrid. 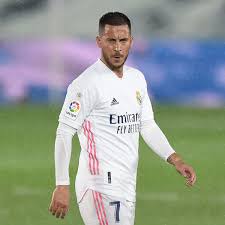 After the end of the match Antonio Rudiger, Thibaut Courtois and Eden Hazard were shown smiling after the final whistle even though the details of their conversation has remained unclear upto now. Eden Hazard was called by Los Blancoz boss Zinedine Zidane to replace Vinicious Junior in second half and Chelsea were advantageous as their former player didn't inflict any treat to them. 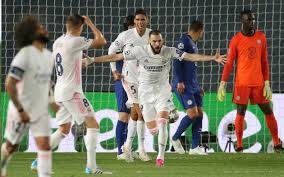 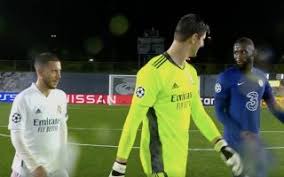 Second leg will be played at Stamford Bridge next time and Chelsea have an advantage over Real Madrid and what they only need to do is to aim for a goaless draw in Stamford Bridge for them to reach final. Manchester City will play against Paris Saint German today night, Will Pep Guardiola's side overcome Neymar and Mbappe's attacking?