"Yeah I Would do That", Wenger Reveals What He'll Exchange The Invincibles Trophy For

By Latestupdates19 (self media writer) | 1 year ago

Arsène Wenger who was one of the greatest coach ever in the premier league and in Europe at large, revealed in an interview what he'll exchange the invincibles trophy for.

Wenger, the greatest tactician for some time in the premier league went the whole season unbeaten. It was in 2003/2004 season where he set that record which has never been achieved in the premier league history. They were referred to as the invincibles and their greatest players at that time were the likes of Thierry Henry, Bergamp, Ljunberg among the many others. 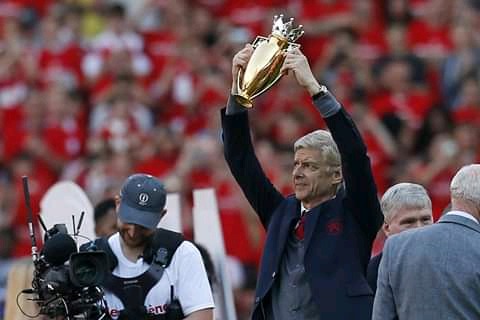 Now,Arsène Wenger aka the the professor, was interviewed by talkSPORT on whether he'll trade the invincibles trophy for the 2006 UEFA champions league. He said it would do it and it is what he will regret most in his career despite having the greatest players that deserved the trophy after beating the likes of Juventus and Real Madrid to reach the finals and not winning it. Real Madrid had players like Zinedine Zidane, Ronaldo, David Beckham and others while Juventus had former Arsenal man Patrick Vieira and many more. 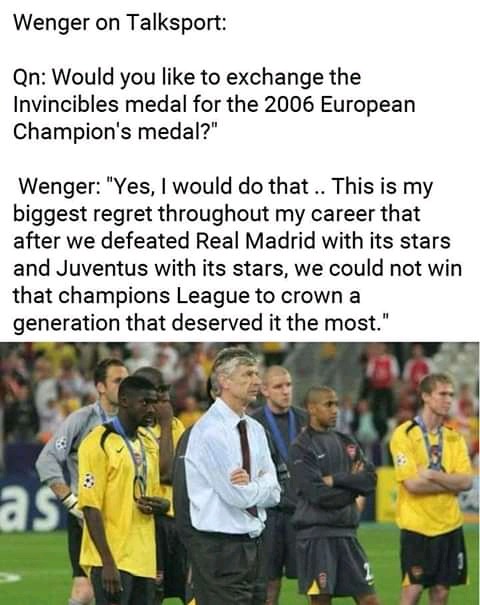 It is really a shame the professor didn't manage to win despite greatest players who outshone Barca in every aspect before the red card. The final was really a bitter one for arsenal fans after their goalkeeper was red-carded and players like Thierry Henry missing golden opportunities on a one on one situation with the keeper. Surely, not an history to remember for the Gunners.

What are your thoughts on the same. Leave your comments below.

Content created and supplied by: Latestupdates19 (via Opera News )