Xavi Hernandez has invested a lot of time this summer in reshaping his squad for the new season’s title race. So far, he has managed to sign quite a few talents into the club, as well as released who others he judged he no longer needed at the club. The lot he currently has within his disposal is very strong and arguably one of the best in Europe.

The squad intelligence at Camp Nou has reached astronomical levels, but it is also worth mentioning that too many cooks spoil the broth. In simple words, Xavi has to let go of other important players if he wants to succeed at the club and one player that is staring expectedly at an away move is 32 year old striker, Pierre Emerick Aubameyang. Chelsea and Manchester United have been heavily linked with a move for him but none has found a concrete breakthrough yet. 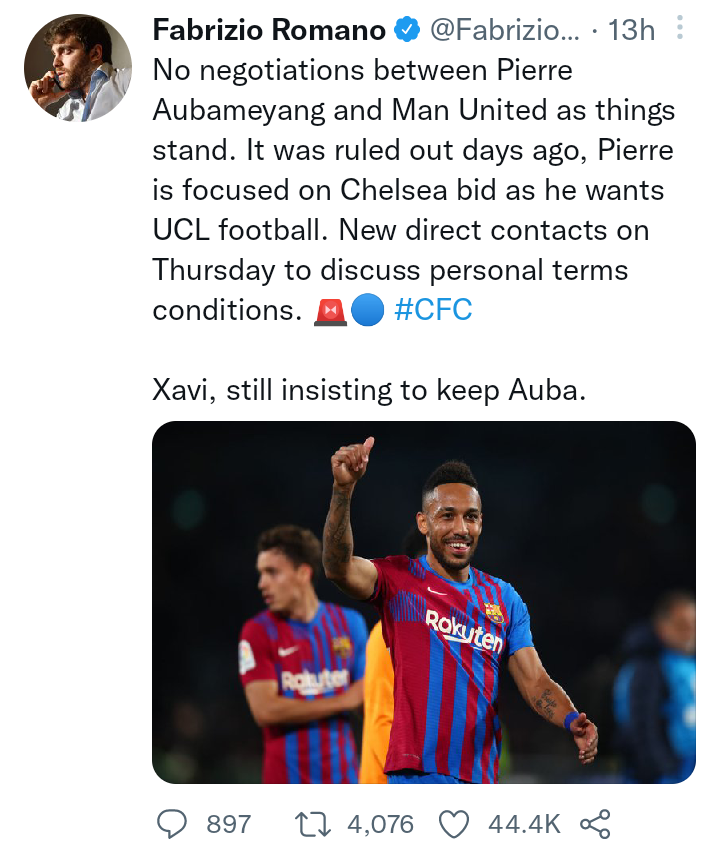 Football guru Fabrizio Romano recently confirmed that the prolific striker is only focused on joining Chelsea because he wants to play in the Champions League. Chelsea have been working round the clock to reach a compromise with Barcelona on the transfer fee but so far the two clubs are wide apart in their valuations for the player. As for Manchester United, they are currently on stand by and will be ready to pounce on him in case Chelsea fail to land him. No Worthy Replacement for Ronaldo…

Pierre Emerick Aubameyang is the closest Manchester United could come to signing a worthy rival for Ronaldo. All other top rated strikers have been clutched tightly by their clubs and signing them would require expending a huge sum of the total budge which is not ideal at the moment. Ronaldo could reconsider his earlier decision to leave the club. (Image: Courtesy of Google)

Cristiano Ronaldo now knows that United need him more than he needs them, giving him an upper hand in his contractual relationship with the club. The transfer window is 10 days away from shutting and Ronaldo is yet to find a befitting club to play for. If no deal comes along, he might decide to stay at Old Trafford and work towards helping the club achieve Champions League qualification next season.

What do you think Ronaldo should do? Should he stay or further push for an exit?