Chelsea would reportedly have to make Erling Haaland the most highly-paid player in their history if they intend claim his services next season.

The Norwegian talisman was vehemently linked with a move to Stamford Bridge throughout the summer transfer window but the deal proved too tricky to be sealed and the Blues eventually embarked on repatriating Romelu Lukaku who cost them £98m. 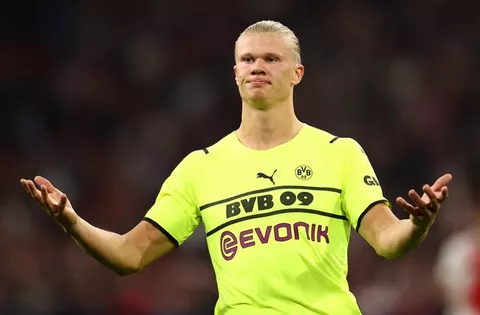 However,that hasn't done much to silence the rumours pertaining Haaland and even Chelsea's manager; Thomas Tuchel has given his say by pointing that talks were held and could even be retrieved at some point in the future.

Talking to SportBILD, he said: “We talked about Erling Haaland a couple of times, including during the transfer window. But then it seemed absolutely unrealistic and not at all feasible.

“We talk about him regularly, of course, because he’s a fantastic player and clearly the defining figure at Dortmund, who is a big rival for us in the Champions League.”

He added: “I don’t think we’ve been really serious about it yet, but let’s see what will happen in the next few weeks."

And Now, Chelsea have been told exactly what it will take to convince the Norway international of a move to West London the following summer.

In accordance with ESPN, the Norwegian goal seeker is demanding a pay packet of £30million a year ;which simplifies to a weekly wage of about £500,000.

It would undoubtedly be a huge boost to the EPL's current leaders to know about Haaland's demands considering his well-revealed release value of reportedly £63million in the forthcoming window .

It remains to be seen whether the Blues will be willing to pay the transfer fee as well as Erling's lofty wage bill.

Such an enormous salary amount would surely make the Dortmund forward the highest-paid player at Bridge, easily surpassing the reported £325,000 weekly money that Romelu Lukaku is currently earning after his exit from Inter Milan.

In fact, Haaland would be slightly trailing behind Cristiano Ronaldo in the Premier League; the Portuguese superstar garnering £510,000 per week after rejoining Man United, according to Sportrac.