Two Hours Of Football With No Goals

By TAFITINEWS (self media writer) | 8 months ago

Before this clash, Cameroon had progressed from their last eight AFCON semi-finals, whilst Egypt had reached the final in all of their last six attempts, meaning one nation was destined to lose their long-standing hot streak. 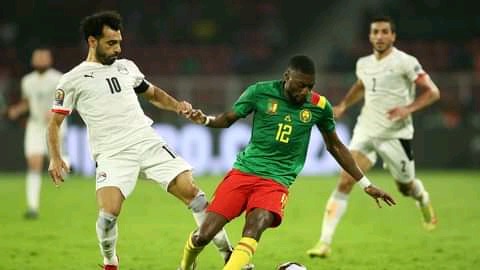 The ‘Indomitable Lions’ dominated the opening half, and their first golden chance to take the lead came through none other than tournament top scorer Vincent Aboubakar.

Meeting Nicolas Moumi Ngamaleu’s pinpoint corner after 24 minutes, the striker could only loop a header onto the post, and the opportunity fell away when teammate Michael Ngadeu-Ngadjui got in the way of the rebound. Karl Toko Ekambi was then gifted an opportunity unmarked in the box minutes later, but with the pace of the ball into him and the pitch’s uneven surface to factor in, he could only mishit his close-range shot into the hands of Egypt’s Gabaski.

Ultimately, Cameroon were unable to make home advantage count before HT, and were forced to become cautious of the ‘Pharaohs’’ growing counter-attacking threat as the game opened up after the restart. The hosts failed to heed the warnings of the Egyptian attackers, and in the 55th minute, Martin Hongla played a backpass straight to Mohamed Salah, only escaping punishment due to great awareness from André Onana to close down the Liverpool man early.

The 90-minute mark was fast approaching, with the semi-final calling out for a late hero. André-Frank Zambo Anguissa was almost that man, but his 40-yard drive with 20 minutes to play agonisingly shaved the post with Gabaski beaten. With neither side willing to take a gamble, the match needed extra time, though Egypt would have to go the distance for the third time this tournament without their manager, as Carlos Quieroz was sent off in the 90th minute.

Another 30 minutes were still not enough to decide the repeat of 2017’s final, so penalty kicks were needed. Egypt had previously won their last five AFCON shootouts dating back to 1986, and booked their place in the final with their sixth-in-a-row, as Gabaski impressively saved efforts from Harold Moukoudi and James Lea Siliki, before Clinton N’Jie failed to convert Cameroon’s final spot-kick.