By Mwenenthi_Reporter (self media writer) | 1 year ago 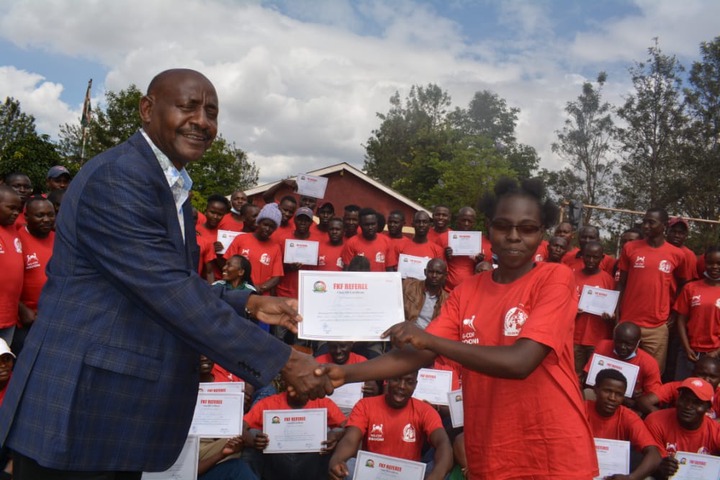 Excitement, smiles, and confidence could not be taken out of 50 trained referees who were among the fans who watched Harambee Stars face off in a friendly match at Nyayo stadium.

In the game that ended 2-1 in favor of Harambee Stars, the 50 were not just here to cheer the home team but also to be exposed in officiating football matches.

The referees' trip from Mbooni is courtesy of area MP Erastus Kivasu Nzioka, who also sponsored their training in November last year.

After the five days of training, the MP promises the team of referees that he sponsor them to watch a Harambee Stars match as they continue gaining more officiating skills.

"We have 18 ladies who have qualified; when I with the FKF officials, they told me we could train them in the next level of referring, I have decided to support them from my pocket, and for the who team. We will check one of these days when Harambee Stars is playing; you go watch the game live and see how international referees officiate games," Kivasu promised after the five days of training.

After the match, the referees had a rare moment to interact with FKF President Nick Mwendwa, Kenya Referees Chairman Antony Makau, and Makueni FKF Governor Mwongela.

Speaking to the team, Nick assured them that FKF is ready to support them, asking them to be vigilant on what they started.

"You should not give up, and we are here to support you; if you do a clean job, we will not fail you; the best thing is to start growing from the grassroots," Nick noted.

On his side, the Kenya Referees chairman Antony Makau lauded the Mbooni legislator for the initiative admitting that the country requires more qualified referees.

Makau encouraged the referees to maintain physical fitness, noting that fitness is core to any good match official.

"The referees you have seen today in this match were once where you are, and this comes from discipline and physical fitness; a referee without physical fitness is not a referee," Makau maintained.

Makueni County FKF Governor Samuel Mwongela revealed that his office plans to partner with the area MP to organize more events to promote talents in the area.

He has thanked Kivasu for engaging area youths in sports in a bid to grow their talents.

"We are going to do more things, we have talked with Mheshimiwa, and we are planning more things in the area," Mwongela noted.

On his side, Daniel Ndavi, who works in the MP's office at the sports department, thanked the MP for promoting the youths in the area.

"I want to thank our MP for this initiative; many leaders forget the youth when they get to the office; our MP is doing an excellent job," Dan noted.

The next group of referees from the area are expected to attend the Harambee Stars match vs Egypt at a later date.