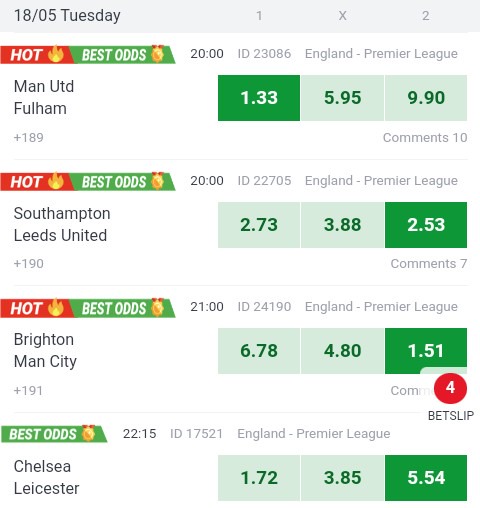 Leicester City are in third place in the Premier League.

Leicester City are two steps ahead of their opponent of the day.

Chelsea are in fourth place in the standings.

Chelsea lost to Arsenal on their last day of the championship (1-0).

Manchester United are in second place in the Premier League.

Manchester United want to return to success after two defeats in a row.

Fulham is in eighteenth place in the standings.

Fulham has lost seven of his last eight days.

If successful, Manchester United would be assured of finishing in second position.

Manchester City are the leaders of the Premier League.

Manchester City have just won on the lawn of Newcastle (4-3).

Brighton is seventeenth in the standings.

Brighton took just one point in their last two days.

Manchester City want to build up confidence ahead of the Champions League final.

Leeds United are tenth in the Premier League.

Leeds United remain on two successes in a row.

Southampton is in fourteenth place in the standings.

Leeds United are almost ten steps ahead of their opponent of the day.