By Agwinas (self media writer) | 9 months ago 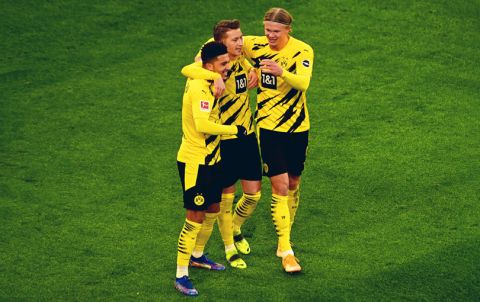 Erling Haaland has carried the striking part of Dortmund side.He has scored 33 times this season.

Borussia is well known of young talented players who are capable of scoring and playing a nice game.

Halland's partnership with Jason Sancho and Reus has been ranked as one of the best attacking trio this season in Europe.

Although Liverpool are facing a difficult season,it has the best attacking trio.

Robert Firmino has been ousted in Liverpool's best three attacking trio after signing of Diogo Jota.

Mo Salah has also continued with his good form this season by ensuring he netted every game.

The partnership of Jota,mane and Salah has been considered as among the best in Europe as it cause threats to most of defenders.

Lionell Messi has continued with his right form and showed that he is unstoppable by ensuring he scores.

Antonio Griezman has also rediscovered his form after a poor run and have started scoring.

Dembele in the other hand has played his part well and has managed to form a prolific attacking trio with Messi and Griezman at Camp Nou.

Moise Keane has shown everyone what they missed by repressenting French side well in attacking.Keane is Everton's player playing on loan in French side after he was not able to get enough playing time in premier league side.

Anytime we hear about psg we think of Neymar and Mbappe. This two players have formed a strong partnership in attacking to represent the French side.

They are well known of counter attacking and whenever they get chance they utilize it by scoring.

Robert Lewandoski has continued with his good form of goal scoring this season.

Thomas Muller and Gnabry's excellence has showed that Bayern has the best attacking trio in Europe at the moment considered that they also have capable players like Leroy sane and coman as their alternative.