Eden Hazard who is arguably Chelsea's best player has revealed the toughest opponent he faced during his premier league days with Chelsea.

The Belgium international who became the Chelsea fans favourite player during his spell in West London left the blue shirt of West London in 2019 and left for Los Blancos. 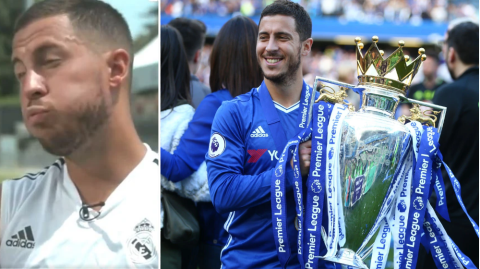 Eden Hazard has not lived up to expectations at Real Madrid because he has struggled with injuries and fitness issues and this summer he has been linked with moves away from the Los Blancos to join teams like Newcastle, Arsenal or a return to Chelsea.

Eden Hazard promised the Real Madrid fans that next season he will give his all after the three years he has been with them not being successful.

He has named Kyle Walker was as his toughest opponent in his premier league days when asked who was the toughest he faced in his Chelsea days.

Hazard stated that he is strong and fast but Kyle Walker is stronger and faster than him and he is one of the best right backs in the world currently.

Kyle Walker plays his football with Manchester city and has won four premier league titles, four league cups, the FA cup and a runners up medal at the 2021 champions league since joining from Tottenham in 2017.