By Media🔎Scan (self media writer) | 1 month ago

England were crowned Euro 2022 champions after a Chloe Kelly extra-time winner lifted the Lionesses to an iconic 2-1 victory over Germany at Wembley Stadium. At first, Lina Magull's close-range finish had to cancel out Ella Toone's extremely ambitious dink in the second half, before Kelly struck home from a corner with 10 minutes of extra time left to send Wembley Stadium into a frenzy.

A tightly contested first period saw half chances at both ends within the first 10 minutes; Ellen White's header was conveniently saved by Merle Fohms, while Lucy Bronze made a brave block with her head to keep out a Sara Dabritz effort.

After a Germany corner prompted a goalmouth scramble, there was a heart in mouth moment. Leah Williamson deflected Marina Hegering's shot before Mary Earps clutched the ball on the line.

England's best chance fell to White, who, after a neat combination with Beth Mead on the right wing, could only fire narrowly wide as the first half ended goalless.

Tabea Wassmuth came on at halftime and almost immediately made an impact, but after racing through on goal, she could only fire directly at Earps.

Germany had more of the ball and territory in the second half, only for England to take the lead with two individual goals. With a sumptuous pass, Keira Walsh sent Ella Toone scampering in behind, and the 22-year-old coolly lifted the ball over Frohms.

Two more tense, compelling halves of football ensued, and as the legs tired, it was a set piece that provided the winning goal 10 minutes from time. At the second attempt, Kelly, who had only recently returned from a lengthy layoff due to an ACL injury, prodded home Lauren Hemp's corner at the second attempt and went full Brandi Chastain in celebration. 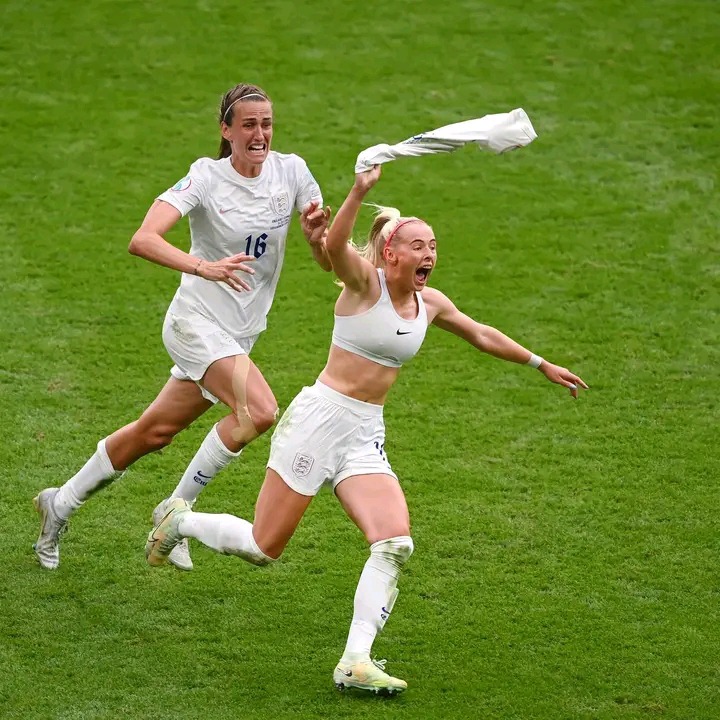 As the clock ticked down, Frohms tipped over an Alessia Russo pile driver from the edge of the area, and as the final whistle sounded, It's Coming Home rang out around Wembley as history was made.

Content created and supplied by: Media🔎Scan (via Opera News )