Fan-favorite Chelsea midfielder is back to action after the summer holiday.

The France international who always wears a smiling face was pictured at Cobham training ground.

The Chelsea ace was posted on Chelsea's official Twitter handle.

"Back to action," the picture was captioned. The caption was followed by an emoji of a fist. 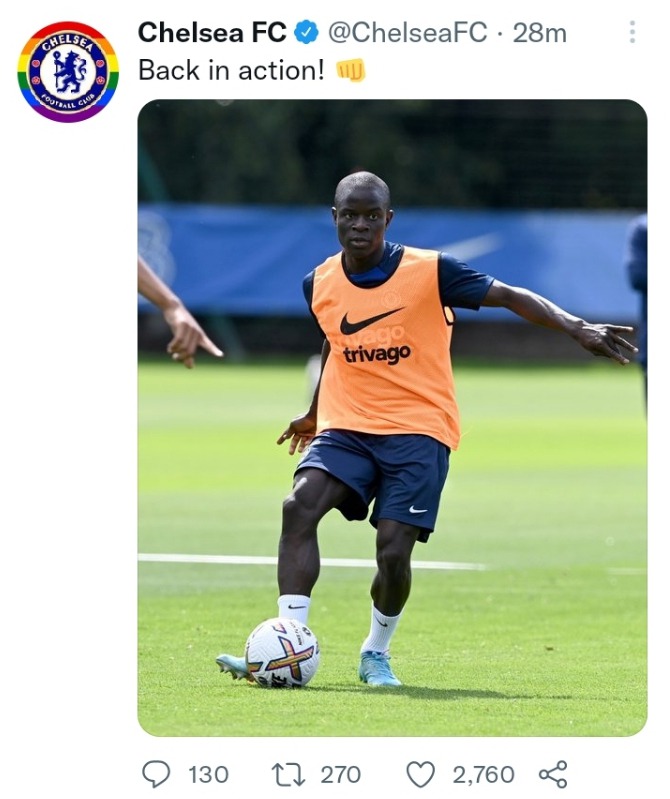 The emoji gave a clear indication of how much the midfielder is revered by the blues.

Kante was captured fully donned in a Chelsea training kit. The ball was on his feet with his head up.

One could think that he is about to give a world-class pass that could win Chelsea a title.

His posture, the fans can tell better as it was not different from the real Ng`olo Kante in action.

Kante joined Chelsea in 2019 during the reign of Antonio Conte for a reported fee of £30m. He went ahead and won a premier league title and FA Cup with Conte before he was sacked.

He joined the Blues from Leicester City after having a very successful season in which they won a premier league title with Claudia Ranieri.

Since joining Chelsea, the styled midfielder has banged five titles.

The five titles include the premier league, FA Cup, Europa League, a world cup, and the champions league title.

The player has so far more than five titles and uncountable personal prizes.

Content created and supplied by: 24/7News (via Opera News )

The Retirement plan for Uhuru Kenyatta

List of Businesses and Companies Owned by DP William Ruto