By Sporthab (self media writer) | 16 days ago

A draw of any goals was enough for Dragon to move to the next round having drawn 0-0 in Cotonou in Benin, in the 70th minute it was 2-2 so Dragon had away goal rule advantage.

As the minute hand of referee watch kept on ticking after equalizing goal by Dragon to make it 2-2 Nyayo National Stadium went silent as if there were no fans.

Prior to the game, Dragon Russian technician Anatoli Nakatoli warned the Mighty Gor that they have a supper Keeper Peter Rufai, incase of goaless draw normal minutes, Gor should count themselves out since no Gor player shall score against Peter Rufai on death penalties spot kicks.

A weak clearance of the ball by Dragon resulted to a thrown in. Gor Mahia throw in specialist Toby ochola took the initiative to make sure the ball lands well on Dawo's head who did not hesitate but a strong flushing header pot the ball into the net with Peter Rufai well beaten. It was a thunderous celebration for the Green Army, Gor Mahia 3-2 Dragon Oueme.

The whole stadium exploded with thrills, ululations, songs in praise of Mighty Gor.Long live Mighty Gor Mahia.Amemory we shall always leave to remember. 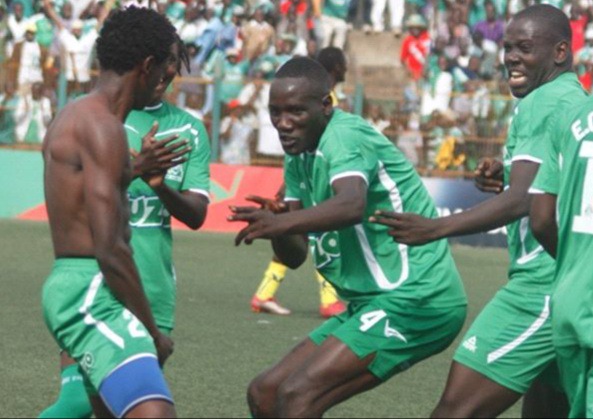 (PHOTOS)Club with Coolest Bus in Africa

"Eric Omondi Paid Me Heavily, To Say I want to Marry Him" Dennis Karuri Reveals in an Interview

Super Wednesday Betting Tips With 102.21 Odds To Place On With 80 And Earn Good cash