Sports is among the highest paying jobs in the world with players pocketing millions of dollars from their wages, prize money and also sponsorship deals . Sports games are followed by many people in the entire world .

Here is the list of the top paying sports in the world;

If there is a dangerous sport in the world it is Boxing. Boxing athletes make huge amount of money in every match. An athlete can even make more money than the tournament prize money. 4 boxing players have made it in the top 20 list of forbes most highest paid players in the world.

Formula one athletes make a lot of money from the prize money and also the brand they represent. Lewis Hamilton who represents mercedes is among the top 20 paid athletes in the world.

Golf has earned itself a place in the top paying sports in the world. Golf is among sports that have the highest prize money in the whole world. Tiger wood is in the list of forbes top twenty highest paid athletes in the world.

Without being told football offers big contracts to players and this has earned its place here. There are 2 players that are in the forbes list of the highest paid athletes in the world. 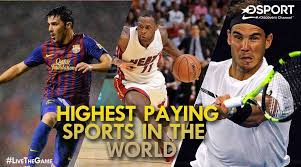 Content created and supplied by: News41 (via Opera News )