By Timothylangat (self meida writer) | 7 days

Many people worlwide have eyed man utd might be champions in the English premier league come next season.There are several views from people and other experts.This is based mainly on the signing.Manchester utd is the current club with most potential signings this summer however this might vary in due course. 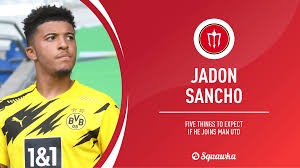 Manchester is predicted that they might emerge winners because of signing key players like Sancho.Man utd officials with Ole Gunnar went ahead and create interest in signing other players like Harry Kane though it has been romours. Olegunnar said also he might offer 40 million 💷 pounds to sign Daglas Rice if Paul Pogba will move out of All Trafford.It is reveals that Pogba have not signed contract with United and he might move out.Ole Gunnar create worries to the fans of other big clubs like Chelsea, Liverpool, Arsenal,man city and others . These are just ideas and opinions from other people and expert but you may also give your predictions.Don't forget to leave a commentand liks#

Content created and supplied by: Timothylangat (via Opera News )