Hoffenheim will come into the clash following on from a 2-0 Bundesliga 1 win as they beat RB Leipzig in their last fixture.

In that match, Hoffenheim managed 42% possession and 22 attempts at goal with 8 on target. For Hoffenheim, the scorers were Diadie Samassékou (12') and Moanes Dabour (68'). RB Leipzig got 5 shots on goal with 0 on target.

A tendency of at least one team drawing a blank in games featuring Hoffenheim has been apparent recently. A glance at their last 6 games shows that this has happened 5 times. In those clashes, opposing sides have hit a goal tally of 7 and Hoffenheim have scored 14. We will just have to find out if that trend can be sustained in this game.

Coming into this fixture, Hoffenheim haven’t won away from home in the past 5 league games. 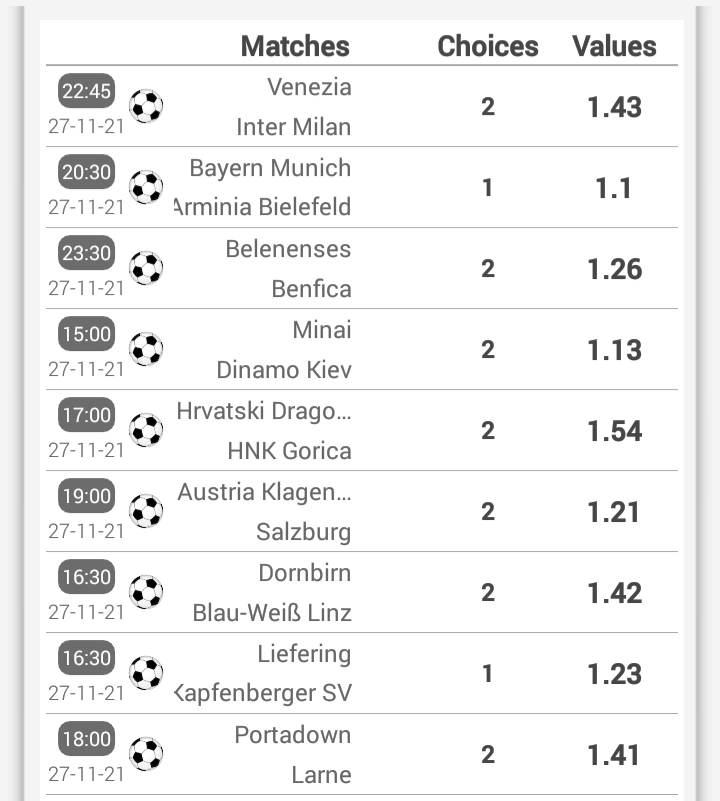 Bayern Munich will want to continue from where they left off last time out with the 1-2 Champions League triumph over Dynamo Kyiv.

At least three goals per game were seen in 6 of the past 6 meetings where Bayern Munich have been involved. Opposition teams scored 13 times in these games whereas Bayern Munich bagged a total of 15. Still, it remains to be seen whether such a trend will persist in this game.

In their last game, Arminia Bielefeld drew 2-2 in the Bundesliga 1 match with VfL Wolfsburg.

Heading into this fixture, Arminia Bielefeld are undefeated in their last 2 league matches away from home.

Alaves go into this match after a 2-2 La Liga drawn game versus Sevilla.

In that match, Alaves managed 32% possession and 8 attempts on goal with 3 on target. For Alaves, the goalscorers were Laguardia (5') and Joselu (45'). For their opponents, Sevilla FC got 15 shots on goal with 6 on target. Lucas Ocampos (38') and Ivan Rakitić (92') scored for Sevilla.

Javier Calleja's Alaves have hit the back of the net a sum total of 8 times in their past 6 outings. The comparative number of goals that have been scored against them in that same time amounts to 5.

In their previous fixture, Celta Vigo drew 1-1 in the La Liga match with Villarreal.

Eduardo Coudet's Celta Vigo have fired home a total of 7 times throughout their previous six matches. The aggregate of goals that have been scored against them during those same matches comes to 7.

Coming into this meeting, Celta Vigo are undefeated in their last 2 away league matches.

Kalonzo Attacked By Angry Atwoli, Revealing What Will Happen To Him and Others After August Poll

"Bring Him Back Home, He Looks So Sad There" Chelsea Fans React To A Photo Of Eden Hazard

The First Kenyan To Own a Mirror As a Gift From Colonialists And How The Mirror Made Him Wealthy.