African Footballers Ranked in Top 10 Balloon d' Or With One Of Them Winning In Football History.

By ArtimonySports (self media writer) | 13 days ago

Balloon d'Or is a football trophy awarded annually since 1956 and is regarded as one of the expensive personal trophy. For many years European players have been winning the trophy, in this article are six players who have been ranked in Balloon d'Or since it was started.

He is a former Liberian professional footballer who plays for Italy, England and France clubs, in England he played for Chelsea and Manchester City. He is well remembered while playing for Paris saint Germain where he wins a Balloon d'Or in 1995. Weah is a current Liberian political president since 2018.

Drogba is a former Ivorian professional and captain of Ivory coast national team. He is one of the legend for Chelsea scoring most goals for the clubs being the fourth highest clubs top scorer mainly between 2001 to 2010 where he becomes 4th in 2007 Balloon d' Or in and named African Footballer of the year twice. 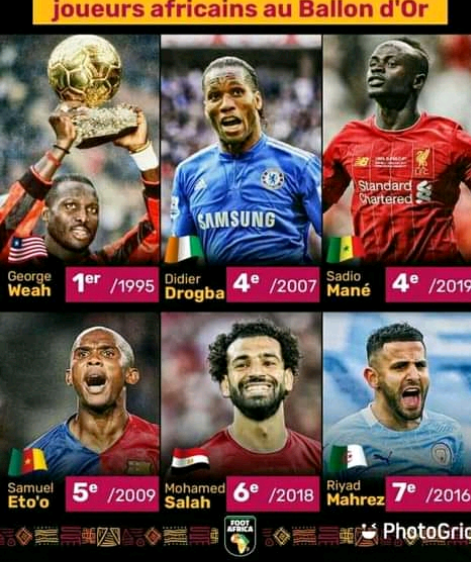 Etoo is a retired Cameroonian professional footballer who plays as a striker, he is one of the best African Footballers having won the best African player of the year four times. He was ranked in 5th position in 2009 Balloon d' Or.

He is a Eyptian footballer playing as a winger for Liverpool and captains Eypt national team known for his dribbling, finishing and speed. The player has won scored many goals winning Golden boot in premier league, in 2018 he becomes the sixth in Balloon d'Or ranking.

He is a professional footballer playing as a winger for Premier league club Manchester City and captains Algerian national team, In 2017 while playing for Leicester city the winger finished the 7th in Balloon d' Or.