Down but not out: Beaten Kipruto keen to fight on in memory of champion father

By Jepkoech (self meida writer) | 25 days 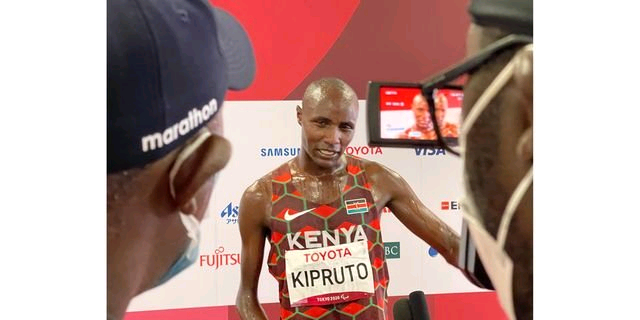 Kenya's Felix Kipruto fields media questions after the 1,500 metres' T11 final at the Tokyo 2020 Paralympic Games at the National Stadium on August 28, 2021. He finished sixth in the race.

Kipruto said being a lone ranger in the race disadvantaged him, coupled with an injury to his right leg just as he tackled the final lap

But then, a certain William Kiprotich Kemei had the audacity to silence Morceli’s brilliant run, upsetting the Algerian in winning the mile race at the ISTAF Berlin meeting in three minutes, 48.80 seconds, a Kenyan record at the time.

His son, Felix Kipruto, then got into running, seeking to take over from where he left.

"My father was a great runner and I am very happy to follow in his footsteps. I feel winning a medal, especially gold in Tokyo, will make him happy in his grave,” Kipruto said going into the Tokyo Paralympic Games.

“I am training hard and I believe I have the potential to win a medal in the competition in honour of my country and late father."

However, Kipruto's hopes were dashed when he finished sixth in the 1,500 metres T46 category while Asiya Sururu Mohammed wound up fifth in the para rowing repechage as Kenya’s hunt for medals at the Paralympic Games remained unsuccessful in Tokyo yesterday morning.

In Paralympics classification, T46 is the category of athletes with upper limb(s) affected by limb deficiency, impaired muscle power of impaired passive range of movement.

Repechage in rowing is a rough translation from French referring to “a second chance” meaning that competitors who did not advance in the heats have another chance of making it to the semi-finals or final.

Kipruto got off to a good start in Saturday’s race, attacking from the front alongside Russia’s independent athlete Aleksandr Iaremchuk with the pack crossing the 400m mark in 62.44 seconds.

Bulgaria’s Hrisiyan Stoyanov then hit the front at 800m (2:07.89) with Kipruto thrown off balance after an altercation with Ethiopia’s Gemechu Amenu Dinsa as the group came to take the bell.

Kipruto never recovered as Iaremchuk dipped just before Stoyanov to take the gold in 3:52.02.

Stoyanov (3:52.63) settled for silver with Uganda’s David Emong attacking from 200 metres out to secure bronze in 3:53.51, eastern Africa’s first medal at these Games.

“My body was feeling good from the start, but towards the finish, after the bell and with 300 metres to go, one of my legs just failed to respond… I tried to kick but it wasn’t possible,” Kipruto, 29, said.

“From the beginning, the pace was slow and I felt comfortable. It’s just that my right leg failed to respond on the final lap.

“I’m disappointed because I really wanted this medal. But in competition there’s always a winner and loser.”

“My father Willy Kemei gave me the motivation to be a champion. I want to now focus and look for enough mileage, endurance and speed so that I do well in the next qualifiers and Paralympics.

“I must train well, and then get into the marathon.”

Kipruto actually started his athletics career as an able-bodied athlete before suffering a bad accident as a child that kept him in hospital for over a month, going into para athletics in 2014 keen to deliver in memory of his father.

He sees Saturday’s failure to medal as a temporary setback on his determined race to make his father smile in the grave.

With the Commonwealth Games coming up in Birmingham next year, Kipruto will have to pick himself up and soldier on.

He must do it for his father.