Tactical: Why Defeating Arsenal Might Be Tough After Their North London Derby Win

By Onlinelegitnews (self media writer) | 17 days ago

Arsenal Manager had a bad start at the beginning of the premier league and their was a greater demand from the fans and the management for him to bounce back and return the club to the winning ways. Arteta was boosted by the return of some key players who returned from the injury.

After people claiming that Arteta had no tactics it was revealed on Sunday that sometime however how tactician you are you can't manage to beat other teams with inexperienced players. After rewatching the game I did my tactical analysis on how Arteta defeated Nuno Aspirato.

Arteta used three key tactics which I have simplified here so that you can easily understand:

Right from kick-off it was apparent that Arsenal came in with appetite to press high, in order to take advantage of Spurs' poor technical & structural quality in the build-up. 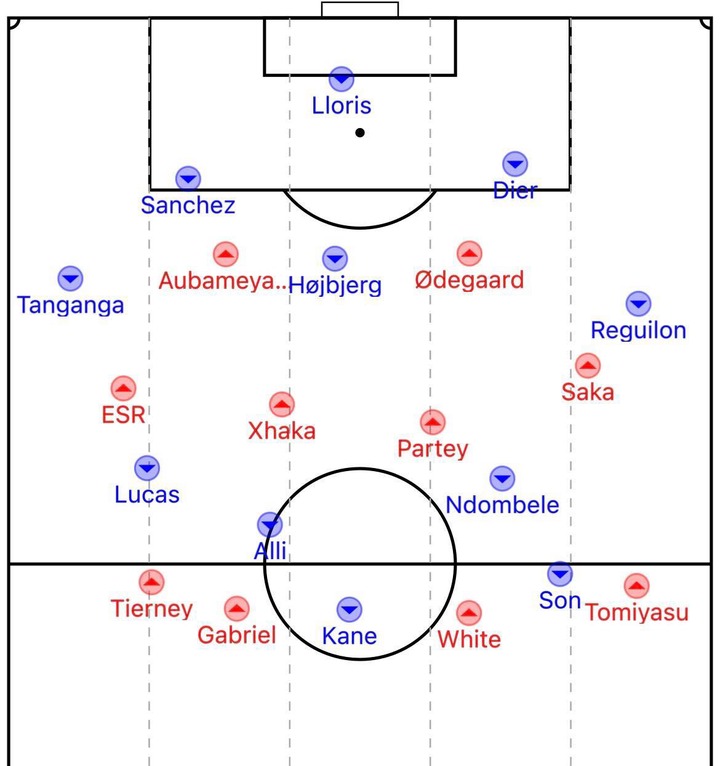 They did that in a 4-4-2 structure, with focus on having players ready to jump to the ball, as well as shadow cover passing lanes. The poor spacing of Spurs' back & midfield lines (too far apart), made Arteta's job easier in that regard. 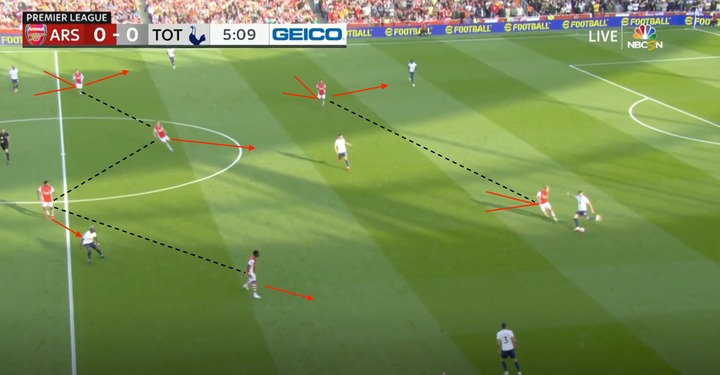 When Arsenal were able to force Spurs' build up deep, their front line pressers would become more aggressive in attacking the ball.

In this instance, there are 0 options for D. Sanchez to pass forwards into, and as he is forced towards the touchline, has no option but to clear. 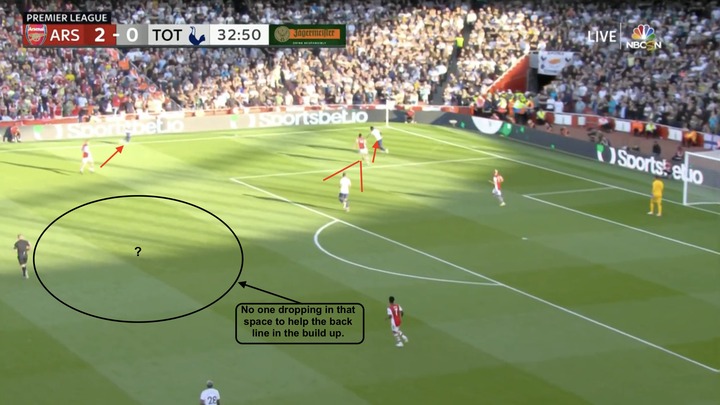 Arsenal would attempt to force a turnover either by winning the ball high up, or by forcing Spurs to play the long ball. From that, they would try to win the first and second balls, an area in which they had the advantage, again due to the poor distances between Spurs' lines.

Prime example of the above is Arsenal's first goal: 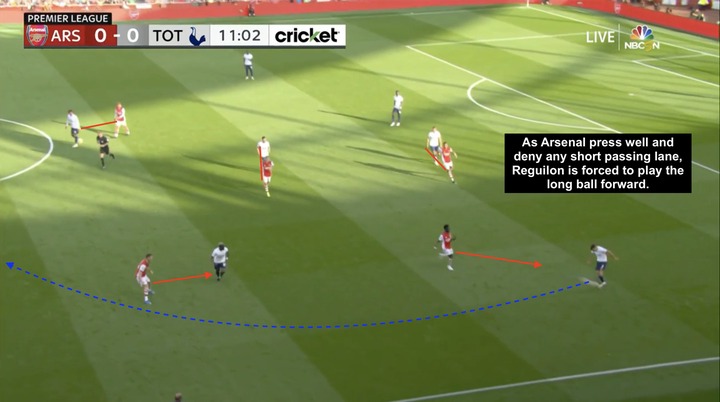 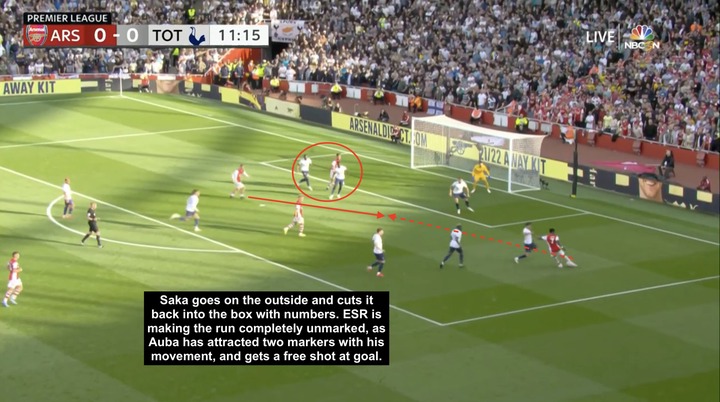 Arteta knew exactly what to do in order to play through Nuno's flawed 4-3-3 press. His team built up in a 3-2-5, with Xhaka & Partey just ahead of Spurs' front 3, KT & Saka holding width horizontally, Auba stretching vertically. ESR & Øde BTL in half-spaces. 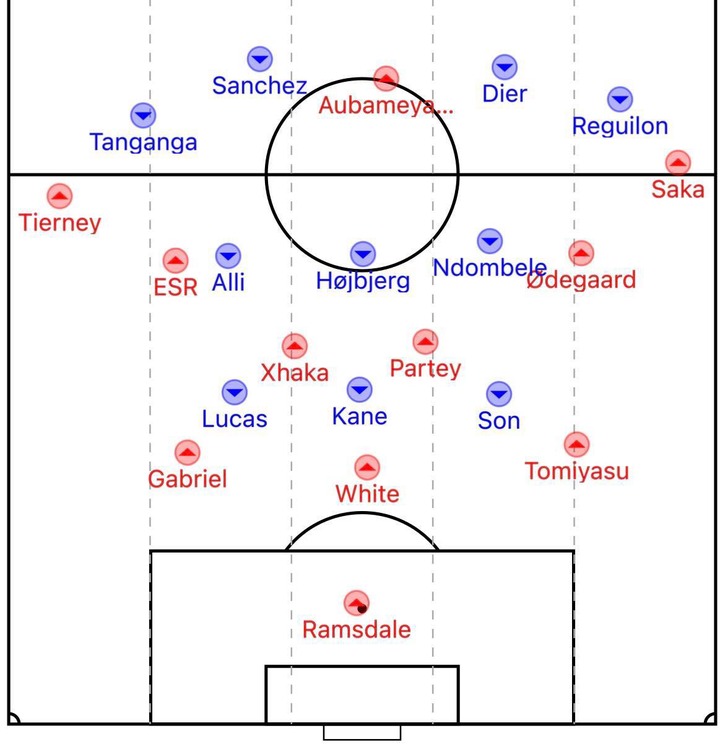 The 4-3-3 press is by definition compact, as it includes the front 3 staying centrally very close together. That means it is inherently exploitable in wide areas. That's why Arteta decided to double up in wide spaces, by instructing Ødegaard and ESR to drift in the half-spaces. 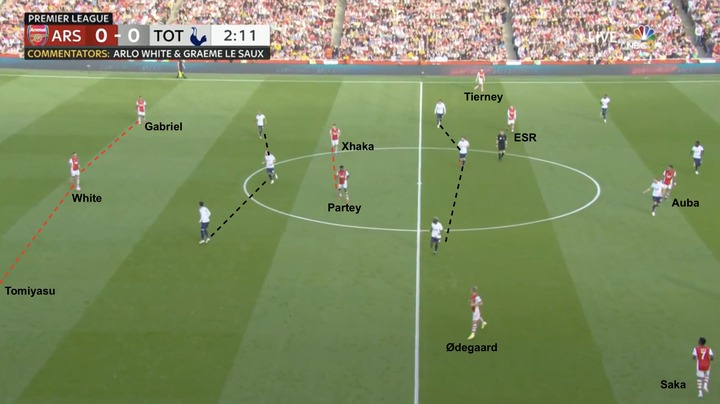 This way Arsenal would set out to progress the ball through the flanks, meaning Spurs' midfield 3 would have to shift across, which requires great communication & synchronisation. Spurs would not shift across quick enough, and exploitable gaps would appear centrally.

And now here is what you all are reading this for, Arsenal's beautiful second goal broken down: 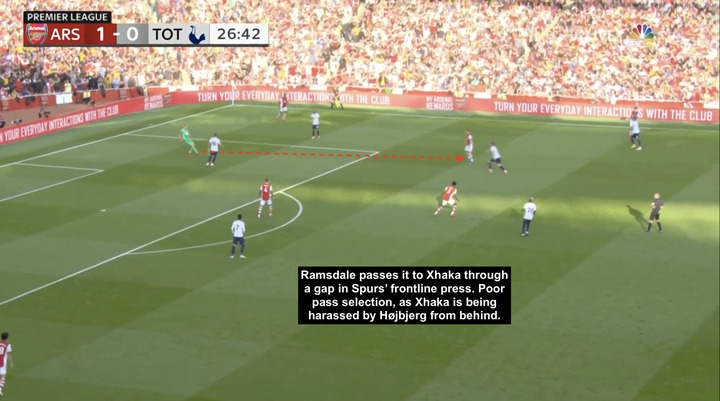 SPURS AGAINST A SETTLED BLOCK:

Nuno came up with an interesting idea, using Lucas as an initiator collecting from deep, to progress the ball centrally with his elite ability to take on players in tight spaces. When that happened, Ødegaard would retreat to form a 4-5-1 block. 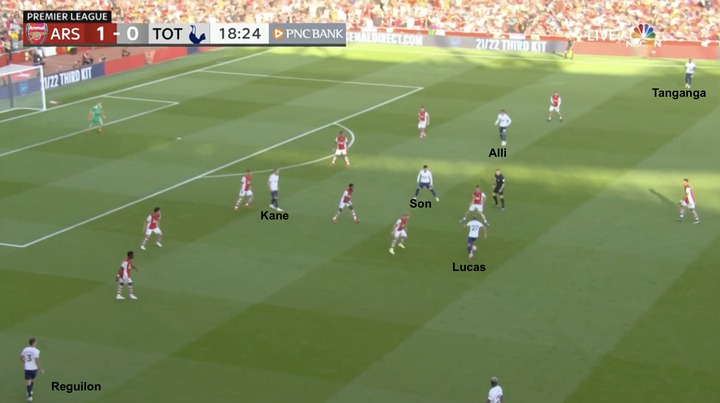 Problem was that Arsenal were easily able to congest the space centrally, and generally dealt with Lucas very well, rendering him unable to create anything in the final third. In this instance, Ndombele tries to initiate, but is met by 4 Arsenal players, with 0 support. 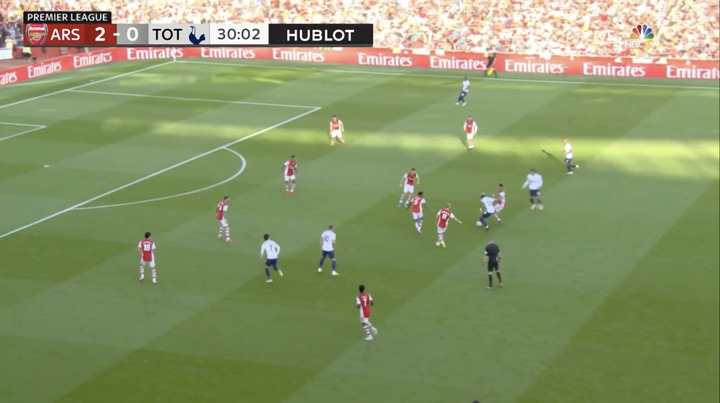 Nuno tried to solve this problem in the second half, by allowing Ndombele more freedom to be the secondary initiator against the 4-5-1 low block, by subbing on Skipp to form a double pivot with Højbjerg behind the ball.

Tottenham also struggled in the first half due to a lack of width, with Tanganga being a well below average attacking RB. Again Nuno turned to his bench to bring on Emerson. He also instructed Reguilon to push further forward, but Arteta responded with an occasional 5-4-1 block. 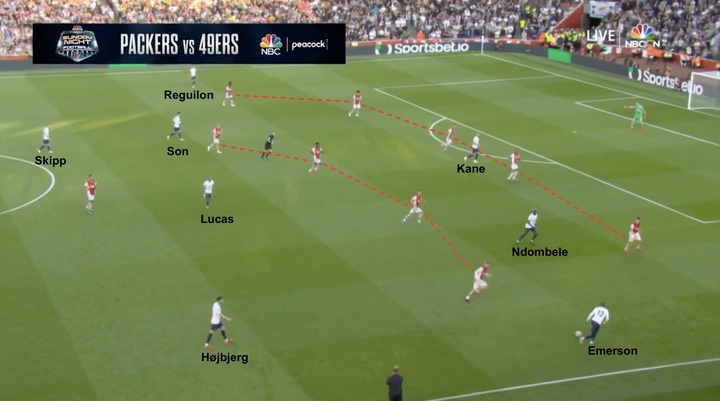 Overall, Arsenal fans have every reason to come away with excitement after this performance, as do Spurs fans to feel concerned.

Thanks a lot for reading, feedback, support and for follow.

ManchesterUnited wins appeal against a ban on their defender by Uefa