By Beatricejack (self media writer) | 1 month ago

Everton are fighting to get off the relegation zone in the premier league and to make the matters worse, they face Chelsea this coming Sunday.

Everton boss frank lampard will face the team he played for in the better part of his football career and became a coach at Stamford bridge too and will be looking for a win in a bid to help Everton survive. 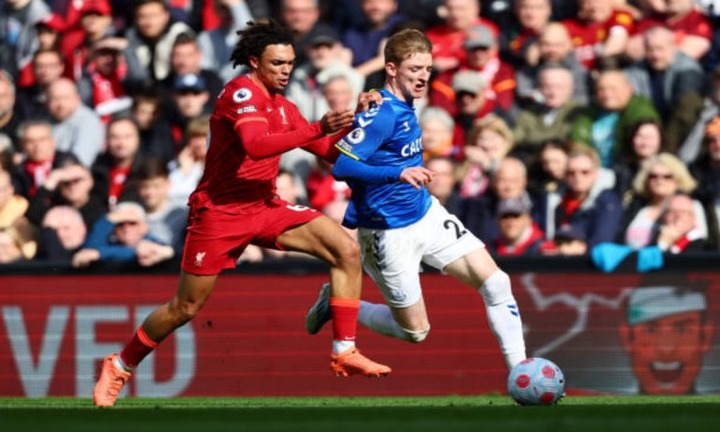 Everton midfielder Anthony Gordon was in the news last weekend for a dive in the Merseyside derby against Liverpool and was booked for simulation.

Everton boss Frank Lampard' has come to the defence of his 21-year old midfielder, claiming that the midfielder has a nice attitude just like Chelsea midfielder Mason Mount.

Anthony Gordon's booking was the first of his senior career for simulation. Forward players and attacking players change direction so quickly in the premier league.

Lampard claims that defenders stick a leg and there are a lot of clips to show that but the Everton boss is not sure whether it's a penalty but there was contact and the Englishman believes the second half incident was a penalty.

Lampard believes Anthony Gordon is a great kid with one of the greatest young attitudes he's ever seen in the game.

The Everton boss believes he's very similar to Mason Mount in his attitude, his application and talent levels and he's so determined.

Everton host Chelsea at Goodison park, the relegation threatened side will be hoping for positive results as they currently lie 18th in the premier league.

Content created and supplied by: Beatricejack (via Opera News )

Finally Revealed What United Players Can Expect From Erik ten Hag Training As They Report Today.

Ground Is Changing: Check The Current Popularity Of Raila, Ruto, Ole Kenta And Ntutu In Narok

Are You Tired of Losing Bets? Try out This Monday 26 Odd Banker.