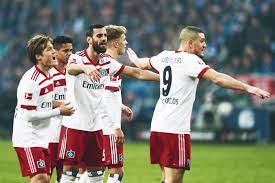 Hamburger SV are one of the historical football clubs in the German game. However, they have not played in the German top-flight since 2018 after suffering relegation to the second tier.

It seems that every season they are in contention for promotion, but somehow shoot themselves in the foot and fail to return to the Bundesliga.

This season could be heading the same way for Daniel Thioune’s team, who face a home game against Karlsruher on Thursday night.

The home team are third-place in the table, in the promotion play-off spot, but a poor run of form has seen them fall three points behind second-place Bochum in the race for automatic promotion.

A 1-1 draw against Jahn Regensburg last time out means that Der Dino are on a four-game winless run. The failure to secure a return to the German top-flight hoodoo could continue if they don’t start picking up wins soon.

We predicts that the home team will boost their chances of promotion by recording a victory in a high-scoring encounter.

Barcelona,Three months ago, no one would have expected Barcelona to make up ground on La Liga leaders Atletico Madrid. Yet, that is just what has happened in Spain.

Barcelona go into a midweek clash with Granada (their game in hand) just two points behind Atletico Madrid.

The capital club are coming off of another shock loss, this time a 2-1 defeat to Athletic Bilbao.

A win for the Blaugrana will send them into first place with five games left on the fixture list. One of Barcelona’s last five games will be a top of the table showdown with Atletico Madrid on May 8 that could dictate where the title goes at the end of the season.

Granada are aiming to throw a spanner in the works. Los Rojiblancos are eighth in the standings with 42 points from 32 matches. They are a solid midtable side with not threat of being relegated.

At the same time, manager Diego Martinez’s team are unlikely to qualify for Europe.

The Frenchman is in fine form going into the game on Thursday. He has three goals in his last two games. Two of those strikes came on matchday 33 against Villarreal as Barcelona won 2-1.

Ronald Koeman is without the duo of Philippe Coutinho and Ansu Fati going into the game. Coutinho continues to recover from a knee injury. Reports on Tuesday indicated that both Everton and Bayern Munich could be interested in signing the ex-Liverpool man for a cut-rate price.

Reports also claim that Barcelona are ready to give Fati a new, sizable contract that would extend to 2026. The deal would also include a €400 million release clause. Fati has been out of action since the autumn with a knee injury which already saw him undergo two surgeries.

Barcelona took 15 points from their last 18 on offer in La Liga. The only blemish on their record was a 2-1 loss in El Clasico to Real Madrid. They outscored opponents 19-7.

Granada, on the other hand, took nine points from the last 18 available. They registered a zero-goal difference with nine goals scored and nine allowed.

The Blaugrana defeated Granada 4-0 in the reverse fixture. They weren’t troubled in the game and should post another victory on Thursday night versus Los Rojiblancos.

The win will take Barcelona to the top of the table as over 2.5 goals are scored once more.