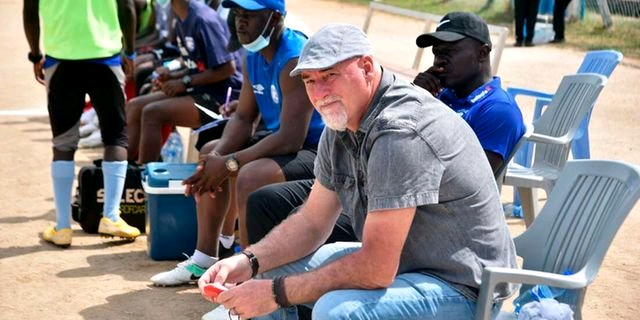 In absence of Aussems, AFC Leopards assistant coach Tom "Gaza" Juma has taken charge of preseason training and was expected to be on the touchline when Leopards meet defending champions Tusker on Sunday

AFC Leopards fans can now breathe a sigh of relief after Belgian tactician Patrick Aussems on Thursday announced that he will be returning to the club next week.

Aussems has been on holiday since April 1 and fans were casting doubts over his future at the den with unconfirmed reports earlier in the week saying he had found a new club in Sierra Leone.

Before the end of last season, the former Simba SC coach said he was committed to rebuilding the 13-time champions into a formidable side which could challenge for the league this season.

“Tired of rumors, fake news ... l am a man of my word and despite difficult times for the club, l will be back next week to help INGWE to become the flagship club of the country again. Tuwe pamoja kufanikisha lengo hili (Let's be together to achieve this target) See you very soon!" tweeted Aussems on Thursday.

The Tweet showed Aussems is ready to walk the tough economic tide with Ingwe who still owe players’ salaries.

Aussems will be coming back at Ingwe to coach a depleted squad after majority of his first team players joined other clubs. So dire is the situation at Ingwe that the club is still sourcing for a new goalkeeper ahead of this weekend's game.

This has forced the club to promote some of the youngsters from the youth team amid dire financial constraints.

Aussems was appointed as Leopards coach on February 8 and led the club to a fourth-place finish last season.

However, the experienced coach will have to work with inexperienced players this season if Leopards don't clear their debts before the transfer window closes next month.