BTTS landed in each of Stockport’s last four away league matches.

Kicking off the League Two schedule in style

While Stockport languish in 16th place in League Two, they’ve played much better than that in truth.

The visitors have netted in every away game this season barring an EFL Trophy trip to Port Vale, so they should at least manage to trouble Northampton’s backline, even if they do struggle to defeat the promotion-chasers at Sixfields.

Grimsby have drawn their last three home league games, two by scores of 1-1.

Swindon have drawn three of their last four away league games, two by scores of 1-1.

Grimsby have gained some momentum in recent weeks during an unbeaten run of seven in the league, but their best performances have come on the road. Swindon are unbeaten in eight, but have drawn three of their last four away league games and will struggle to break down a Mariners defence that has conceded only twice in the last four league games. 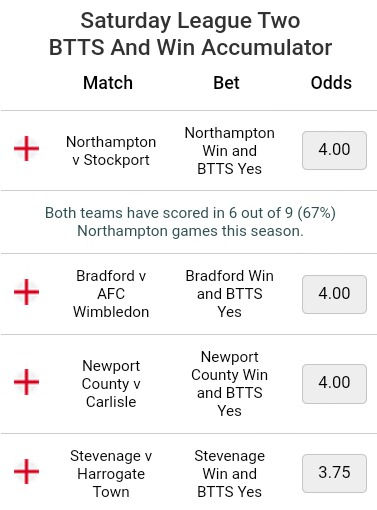 RIP: Sorrow As A Father And His Son Die In a Tsavo Plane Crash

A Plane Crash That Has Left A Big Damage To A Family, Father And Son Dead

Number Of People Who Perished In the Tsavo Plane Crash.