By Hustler.com (self media writer) | 1 year ago 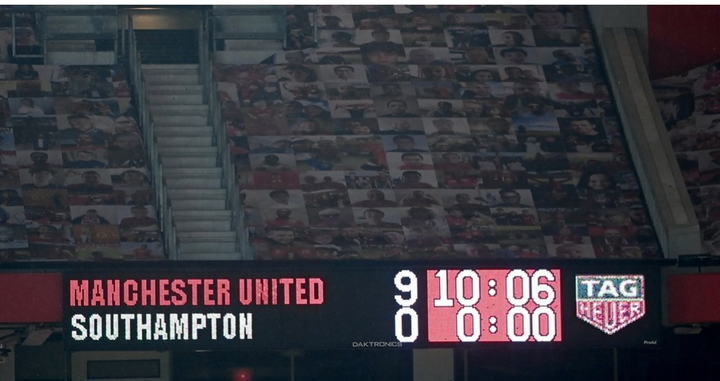 Manchester United returned to winning ways in destructive mode as they humbled, humiliated and buried Southampton in shame as they scored nine goals without any response from their opponents at Old Trafford.

United’s win was aided by two red cards issued to Southampton’s players, the first three minutes into the game and the other five minutes before the end.

The visitors’s midfielder, Alexandre Jankewitz, received a straight red card for a high tackle on United’s Scot McTominay just 90 seconds into the game throwing the match in the hosts’ favour.

It didn’t take long before United took the lead through Aaron Wan-Bissaka, opening the way for a torrent of goals by Marcus Rashford, Edinson Cavani and an own goal to make it four in the opening half.

Anthony Martial scored two, Bruno Fernandes netted a penalty, McTominay put in another and finally Daniel James iced the cake as United ran riot with five more goals in the second half.

Southampton defender Jan Bednarek was also sent off in the dying minutes for a foul on Martial.

The scoreline read United 9 Southampton 0 at the end.

It was the first time United was scoring nine against any opponent since achieving the same scoreline against Ipswich in a league game in 1995.

For Southampton, it was the second consecutive season they were conceding nine goals in the EPL as they were thumped similarly by Leicester at home last year.

The win moved United at the top, level with rivals Manchester City with 44 points but with less goals and having played two games more.

Southampton remain at 12 with 29 points.

In the earlier game, Arsenal lost to Wolverhampton Wanderers by two goals to one as they also went down to nine men after defender David Luiz and goalkeeper Bernd Leno were red-carded for denying their opponents’s strikers goal-scoring opportunities.

Arsenal went ahead with a superb strike by Nicholas Pepe before Luiz was sent off for fouling Wolves striker Willian Jose in the penalty box.

Ruben Neves scored the penalty to ensure the hosts went for the break level with in-form Arsenal.

Joao Moutinho scored with a wonderful strike outside the box just minutes into the second half.

Leno was soon sent off for striking the ball away with his hands outside the box.

Arsenal avoided conceding more goals but the defeat ended their five-game unbeaten run that saw them move up to tenth in the table with 31 points.

With the three points, Wolves go up to 14 with 26 points.

Content created and supplied by: Hustler.com (via Opera News )

"I Raped A Minor And I Was Jailed For 97yrs, I Ruined My Life And I Regret What I Did" Samuel Stated