The goalkeeping role is the most underrated position in the world of football despite the shot stoppers being influencial in the game. The goalkeepers have not been recognized much in recent years where the role has been revolutionized. Most goalkeepers have pulled out world class performance to help their teams win trophies and compete with other clubs. Here are the top goalkeepers in 2021.

The Slovenian was influential to Atletico Madrid side during their title winning campaign. He was also the La Liga player of the season.

The UEFA Euro player of the tonourment and Yashin trophy winner was influential to both AC Milan and Italian national team. He also finished 10th at the Balon dor awards.

He is a true legend of the game who revolutionized the sweeper keeper role. At his 30's it seems nothing is stopping him soon. 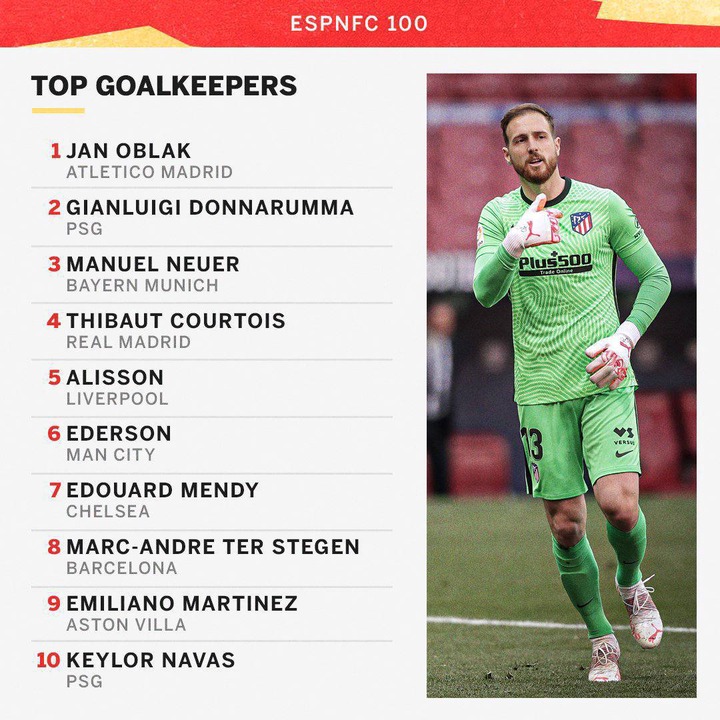 The Belgian shot stopper has been influential for Real Madrid and the Belgium national team. He was nominated for the UEFA best goalkeeper award and the Yashin trophy.

The goalkeepers goal secured a place for Liverpool in the top four. He also helped Brazil reach the Copa America finals.

The Brazilian keeper has been influential for Manchester City in the 2021 title winning campaign. He also won the premier league golden glove.

The most decisive figure in the Chelsea's unbelievable run to the champions league winning season. He was also named UEFA best goalkeeper and finished 2nd at the Yashin awards.

Despite the recent drop of form at Barcelona, the goalkeeper helped them finished third and secure a Champions league spot.

Was one of the best goalkeeper in the premier league. He also helped Argentina win the Copa America.

Was influential in PSG UCL run upto the semifinals.