By Tonie_art (self media writer) | 1 year ago

It's match day 10 and Jose Mourinho's Tottenham Hotspurs are sitting in the 2nd position in the premier league table. A win at chelsea today could send them top of the table after Liverpool were held by Brighton. Despite starting the season on a note, spurs have scored the most goals while conceding the least goals this season.

Chelsea are in 3rd position with 20 points. This is a very crucial game for both teams and both managers wish to get a win and be top of the premier league table. I'll analyse why Tottenham will beat chelsea.

Towards the end of the last transfer window, mourinho made key signing who are the key ingredients in their current form. They include Bale, Doherty, Reguilon and Hojberg.

This season Tottenham have been willing more than ever to play long balls whenever possible contrasted other big teams. Unlike other managers, mourinho doesn't prefer building form the back. 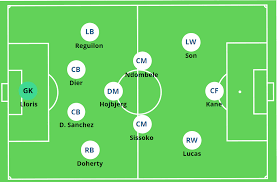 Alternatively, Tottenham builds up from the center backs Eric Dier and Sanchez. Hojberg moves back in a more defensive role by dropping deep towards the end of the edge of the right end of the pitch. This move gives the right backs Doherty or Serge Aurier a chance to move forward while knowing the back is covered.

With left backs and right backs on the attacking move, the wingers Gareth Bale and son can move forward in a central attacking position. Harry Kane stays flexible so as to act as a striker.

Ndombele would then move backwards to assist the midfielders sissoko in a more defensive role in order to counter attacking moves from the opponents.

Content created and supplied by: Tonie_art (via Opera News )