Manchester united players have returned to training under the new Coach Erik ten Hag and they have trained for almost a week now.

Erik ten Hag had to admonish his Manchester united players after some errors by Bruno Fernandes, Diogo Dalot and Marcus Rashford.

The dutch took over an underperforming Man United side and has to make them competitive over the first two weeks of pre season after returning to the Carrington training ground. 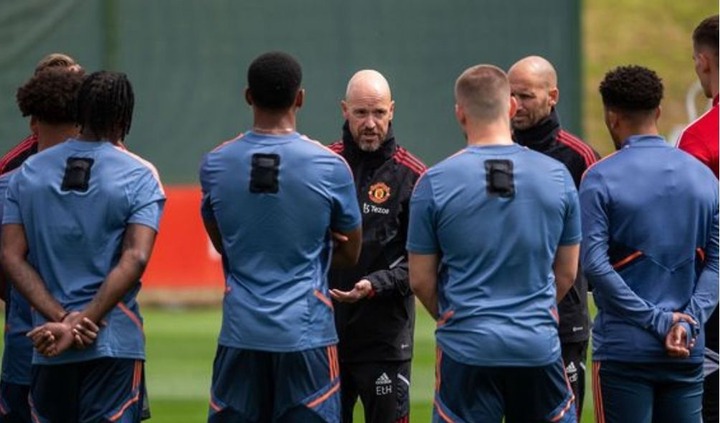 Erik ten Hag intervened to chastise his players as Bruno Fernandes was the first to make a mistake passing to Elanga's left side. McClaren shouted," On the right foot Bruno, On the right foot."

Dalot also made the same mistake when he passed the ball to McTominay's left side rather than right.

Marcus Rashford who will be hoping for a fresh start was the third to make the same mistake passing to the right side of Antony Elanga.

The Coach had to intervene by screaming," To the right Marcus!" He further intervened by shouting, "We are making too many mistakes."

Ten Hag hopes for some more signings after a rough start to life at Old Trafford after terminating his Ajax contract.

Manchester united have only completed the signing of Tyrell Malacia who is a left back and other sources also claim that Eriksen has agreed to leave Brentford and join Manchester united as a free agent as Ten Hag continues his search for technical midfielders.

However, their main forward Cristiano Ronaldo's future at the club remains a doubt as the Portugal international wants to be in champions league football next season. He has not been in training and this may be because of his desire to leave.

Things Get 'Hot' in The London Derby as Top Managers Fight, Both Receiving Red Cards (Video)