NEC have conceded in eight of their last 10 games this season.

Roda let in a goal in 79% of their regular season trips.

Four of the last five meetings between these two have finished without a clean sheet.

The hosts scored at least three goals in each of those wins, with four 3-1 wins

NAC Breda lost four of their five meetings with the top six away from home.

The visitors have scored in 22 of their last 23 games.

Tranmere are managerless and have won two of their last 11 games.

Morecambe have won five of their last six games.

This two sides have scored in four of their last five meetings.

Over 2.5 goals and both teams to score has landed in five of the last six meetings between Genk and Antwerp.

Genk have won three of their last four league matches.

Antwerp haven’t won away at Genk since 1993.

Both teams have scored in three of the last four meetings between Anderlecht and Club Brugge.

Anderlecht have drawn three of their last four matches.

Club Brugge have won only one of their last four assignments. 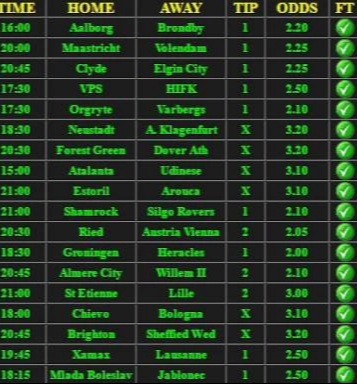