By Leggitwriter (self media writer) | 7 months ago

Sancho has been a generational talent that has been admired by many fans, sports personnel and clubs. From since his signage from Manchester City, he has been able to score several goals and provide several assists that has spur Dortmund to it's success.

Jadon Sancho has been on Manchester United's radar for a very long period of time. There have always been speculations that he might sign for Manchester United as soon as possible but there's no step that was taken to take him to Old Trafford.

The speculations are back once again bearing in mind that the summer transfer window is edging closer. Manchester United have been heavily linked this time throwing out Chelsea FC and Liverpool FC who were also thought of being in pursuit of his deals.

A famous sports journalist, Liam Canning who reports for Manchester United Evening News has confirmed that strides taken to sign Sancho have bore fruits and it's just a matter of time before he lands at United. He wrote,"Sancho edging closer."

Fabrizio Romano had also confirmed about United's interest in Sancho and he wrote,"Manchester United have re-started contacts to sign Jadon Sancho. Talks on with player’s camp on personal terms [potential contract until 2026]. No official bid yet. BVB prepared to sell Sancho - but only for €90/95m. No move from #LFC. 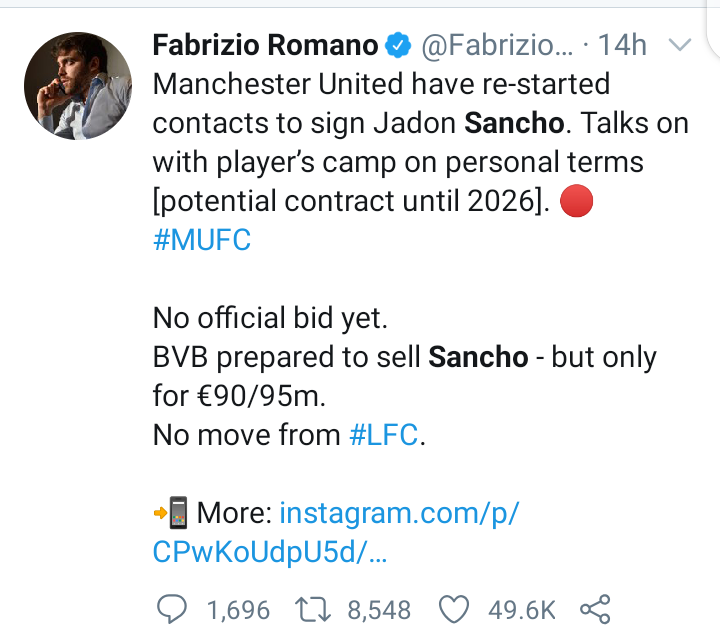