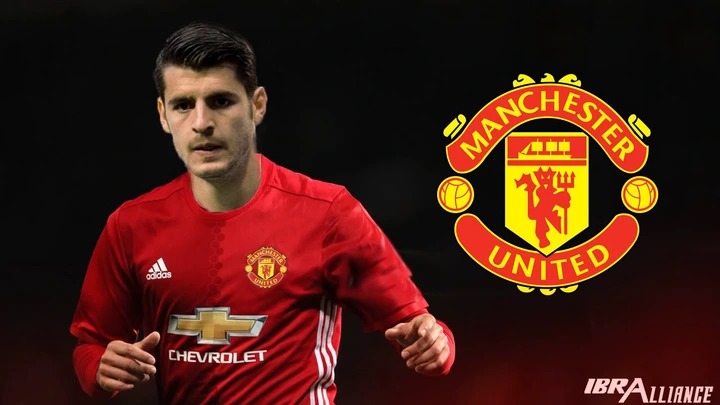 Former Chelsea player has been offered a chance to sign with Manchester United.

It has been claimed that Manchester United has been 'given the opportunity' to acquire Alvaro Morata, a striker who formerly played for Chelsea. Morata has reportedly been made available to Erik ten Hag's side, who are in need of offensive reinforcements, and ESPN reports that this move was done. They had lately been associated with the signing of Marko Arnautovic, who is 33 years old; however, the Manchester Evening News claimed that the club has dropped its interest in the player, in part owing to the criticism from the supporters. Marko Arnautovic is a forward who plays for Stoke City

Gomez Is Becoming More Of A Focus For Man City

According to Fabrizio Romano, a specialist on transfers, Man City are reportedly close to completing a deal to acquire Anderlecht left defender Sergio Gomez. The fee will be more than ten million euros, and after the completion of the final elements, it will be finalized.

Sergio Gomez, a 21-year-old Spaniard currently playing for Anderlecht, is a player who Man City is interested in acquiring for their development team.

Diop is going to Fulham for a physical in advance of his £15 million transfer.

Issa Diop is now undergoing a medical examination in preparation for his transfer from West Ham United to Fulham for the fee of £15 million. There has not yet been a decision made about the specifics of the defender's personal terms. In order for him to be ready for Saturday's game against Wolves, Fulham has to get him registered by Friday at noon.

The opportunity to sign Wijnaldum was turned down by Ten Hag.

The opportunity to recruit Georginio Wijnaldum, a midfielder who formerly played for Paris Saint-Germain and Liverpool, was passed up by Erik ten Hag before to Wijnaldum's transfer to Roma last week. The former Liverpool midfielder expressed serious interest in playing for United. Ten Hag is the primary mover and shaker in the pursuit of Adrien Rabiot, who is now playing for Juventus.

The third offer for Fofana is being prepared by Chelsea.

Chelsea is putting together a third offer for Wesley Fofana, but the club is also looking into alternative options for their center defense position in the event that this strategy is unsuccessful. Chelsea has previously had two bids for the player, both of which were turned down by Leicester City. According to Sky Sports News, neither bid came close to meeting Leicester City's value of the player.

Information and rumors about transfers LIVE: Chelsea are poised to make a world-record offer for Fofana | Goal.com

Celtic have enquired about the availability of offensive midfielder Alex Collado from Barcelona. It has been reported that a number of teams in Europe, notably Olympiacos, are showing interest in the player who is 23 years old. Collado, who is versatile enough to play on either flank, spent the previous season on loan at Granada.

Celtic are keeping an eye on Alex Collado, a winger for Barcelona B, although they have plenty of competition in Europe.

Man United's pursuit of Arnautovic has come to an end.

There will be no attempt made by Manchester United to complete a transfer for Bologna striker Marko Arnautovic. United had a bid of £7.6 million turned down, and although they were anticipated to make another attempt with a better offer, they have chosen to pursue other prospects instead. It is claimed that the asking price for the 33-year-old player is more than what United would be willing to pay for him.

Manchester United have ended their pursuit of Marko Arnautovic, and Erik ten Hag is looking to add a striker to his squad, according to Daily Mail Online.

The transfer of striker Nikola Vlasic from West Ham to Torino has been finalized according to an agreement reached between the two clubs. The transaction consists of a loan with an option to purchase for a total price of £15 million, which includes any add-ons. Vlasic has a medical exam scheduled for tomorrow, therefore he is travelling to Italy today. Last summer, West Ham paid a total of £30 million (with add-ons) for the right to sign Vlasic to a deal that was initially for five years.

In the fight to recruit Nikola Vlasic on loan from West Ham, Napoli is now in the lead over Torino.

RB Leipzig have re-signed striker Timo Werner from Chelsea. After leaving for Chelsea two years ago and signing a £45 million transfer fee with the Blues, the 26-year-old player is now back with the Bundesliga club that he left to join Chelsea.

Timo Werner's transfer to RB Leipzig has been finalized, and the German attacker has sent an emotional greeting to the Chelsea supporters.

DONE DEAL: Daly has agreed to sign a three-year contract with Villa.

Aston Villa has officially announced that they have signed England international Rachel Daly to a contract for the next three years. Daly comes to the club from Houston Dash in exchange for a sum of money that has not been revealed.

Aston Villa is ecstatic with the agreement for European champion Rachel Daly, and the club is calling it a "big acquisition." | Aston Villa Women | The Guardian

3 Organizations That You Must Know Before Investing in Shares

The State Makes A Multi-billion Move

Zari Hassan Thrills Her Fans With A Cute Dress As She Flaunts Her Expensive Cars.(Photos).