Timo Werner Twice Disappointed as VAR Chops Off His Goals 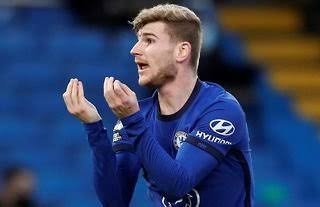 Timo Werner was twice disappointed by the decision of the Video Assistant Referee (VAR) cutting short his celebrations in the match against Leicester City at the Stamford Bridge on Tuesday night. Werner had his two first half goals ruled out for offside and handball respectively by the pitchside technology in the game officiated by Mike Dean as the center referee.

Werner's first celebrations came in the 22nd minute of the match as Chelsea sought to beat Leicester City at position 3 on the table.

The German international had a second disappointment in the 34th minute when he netted past Kasper Schmeichel only for Mike Dean to cut short his celebrations once again. Werner had nicely headed in but had his hand touch the ball thus raising VAR intervention.

Luckily for Chelsea, they managed to win 2-1 courtesy of Antonio Rudiger and Jorginho. Rudiger headed home from a corner kick in the early minutes of the second half while Jorginho converted from a penalty kick after Timo Werner was brought down in the box.

Second half substitute Kelechi Iheanacho reduced the gap to a goal after a mix up in the Chelsea defense. The Blues held on to win, overtaking Brendan Rogers' side from position 3 before final games on Sunday.

Chelsea will play Aston Villa away while Leicester City will host Tottenham Hotspur at the King Power Stadium.

Done Deal: Arsenal Complete Their First Deal Of The Summer