By Plug-Right (self media writer) | 1 month ago 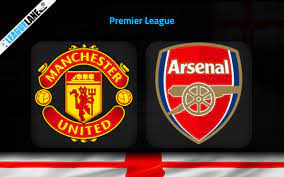 Manchester united will be looking to return into winning as they host Arsenal on Thursday evening.The red devils come into this fixture after a run of disappointing results in the past months with their last match ending on a 1-1 draw against Chelsea.

Michael Carick will again take charge of the United team as Ralf Rangnick finalises his workpermit as Christiano Ronaldo will be looking to return to starting IX after being dropped to the bench against Chelsea.

Harry Maguire will probably return to the starting IX from suspension. While Luke Shaw will go throuugh several tests after missing the games against Villarreal and Chelsea following a head injury.

Manchster United will be withought Raphael Varane, Paul Pogba and Edison Cavani who remain on the sidelines with injuries.

Arsenal on the other hand willbe looking to continue with their fine run at Old Tafford after seing off Newcastle united 2-1 last Surtaday.Arsenal will hope to welcome back Bukayo Saka after an injury against Newcastle.Granit Xhaka and Sead Kolasinac are still not fit and will not be involved at Old Trafford.

Manchester United are winless in their last six Premier League meetings with Arsenal and they've never gone seven league games without a win against the Gunners before with Arsenal keeping a clean sheet in each of their last three meetings with Manchester United in all competitions, as many as they had in their previous 13 against them. They've never kept a clean sheet in four consecutive games against the Red Devils before.

Content created and supplied by: Plug-Right (via Opera News )