By MiriamChemutai (self meida writer) | 13 days

Atletico Madrid manager Diego Simeon has today criticize Thomas Tuchel for what he did after eliminating Atletico Madrid in UEFA Champions League round of 16. Speaking to one of the channels today morning, Diego Simeon criticize Thomas Tuchel and chelsea squard for their warm celebration after they were drawn to play against FC Porto in UEFA Champions League quarter final, 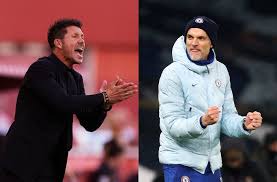 " He ( Tuchel) has underrate Porto Fc but we shall see what will comes after the game itself, they eliminate Juventus and they can also follow the suit to Chelsea" says Diego Simeon.

Chelsea thrashed Atletico Madrid with 3-0 aggregates in champions league round of 16 after beating them both home and away. Chelsea were drawn to play against Porto Fc by FIFA quarter final and they will play with either Liverpool or Real Madrid if they qualify to reach semi final.

Diego further explained that Fc Porto has a full consistent and competent squard which is very difficult to overcome and he predicted that they will trash Chelsea mercilessly when that time comes,

" I personally understands Porto very well, they have a very stable and flexible squard who works as a team to ensure the success of everyone. They take the match as player centered and if Chelsea will not be watchful, they will end up gnashing their teeth" he added.

Tonight Special Matches To Bank on and Earn Huge Money With 178.8 Odds Picks

Opinion: SK Macharia Blunders as He Seeks Deliverance From a Curse He Received for Supporting Raila