Erik Ten Hag is set to take over as the permanent manager of Manchester United after making a deal with the board. 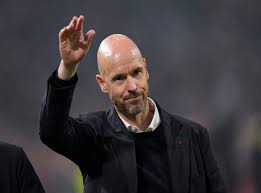 On Sunday, Manchester United will play their last game of the season at Crystal Palace. They want to win the game so they can play in the Europa League next season.

When the Dutchman got to Manchester, he sent a message to all of the players telling them to test each other before deciding who should leave and who should stay. Erik Ten Hag said that he believes in all of the players, especially Cristiano Ronaldo, whom he called a "giant."

Cristiano Ronaldo says that Manchester United believes in Erik Ten Hag and thinks he can rebuild the club. However, Ten Hag needs time to do this, and he won't just come in and start selling players without giving them a chance to prove themselves.

Ralf Rangnick said that Manchester United needs 10–11 players to fix its problems, but the club has said that the next manager will only be given £100–120 million to sign players unless he can get the money by selling players.

The new manager has said that he doesn't have a problem with any player until he coaches them, so players like Anthony Martial and Donny Van De Beek will get another chance to show what they can do.

Did you think Erik Ten Hag could help Manchester United?