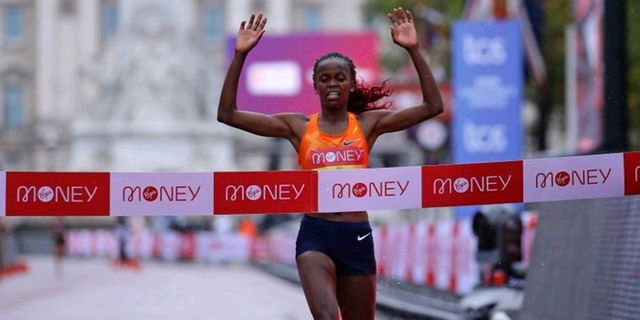 Kenya's Brigid Kosgei won the women's race of the 2020 London Marathon in central London on October 4, 2020. This year's London marathon, an elite-athlete only event, takes place in a "secure biosphere" on a enclosed, looped course, in St James's Park, due to coronavirus restrictions.

Compared to last year, only six athletes from Kenya will compete in the race

Defending champion Kosgei to team up with Jepkosgei, Jemeli in women’s race as Kipchumba, Ekiru and Chebet do battle in men’s category in the streets of London

This years’ edition of the London Marathon has attracted a smaller field, but the race is nevertheless expected to be competitive when the athletes line up in the English capital on October 3.

This year’s race is taking place at a time the world is still battling the coronavirus pandemic which has forced organisers to shift the race from the traditional month of April to October.

Compared to last year, only six athletes from Kenya will compete in the race.

Last year, the race was held in a bio-secure bubble at the St James Park in London. As a precautionary measure against the possible spread of Covid-19, no fans were allowed to cheer the athletes along the route during the race.

Ethiopia’s log distance running legend Kenenisa Bekele pulled out of the men’s race at the last minute due to a calf injury he had picked in training.

More disappointments were to follow as pre-race favourite Eliud Kipchoge of Kenya who is also the world marathon record holder finished in eighth position, clocking 2 hours, 06 minutes and 49 seconds.

In the women’s category, Kosgei retained her title after winning in 2:18:58 ahead of United States of America’s Sara Hall who timed 2:22:01.

To minimise the chance of contracting Covid-19, Kenyan athletes who were to participate in the race jetted out of the country in the same flight.

Athletes and members of their technical teams also boarded the same flight. The aeroplane carrying athletes was scheduled to pick more athletes in Addis Ababa, before heading to Athens for a scheduled stop over. The team would then head straight to London’s Stanstead Airport.

Pacemakers and elite athletes with their technical support teams were ferried in a 56-seater plane which landed at the Eldoret International Airport a day before the scheduled date of travel.

The crew who were six in number, spent the night at The Boma Inn Hotel in Eldoret.

Speaking exclusively to Nation Sport in Eldoret at the time, captain Julian Mogg who isin charge of the flight, said that he was delighted to fly athletics champions to London whom he has been seeing on television.

“We are delighted to fly the athletes who will compete in the London Marathon. I’m happy because I will be able to see them during the flight,” Mogg said at the time.

The London Marathon route is iconic and runs from Black heath in the south east of London to the finish line at The Mall.

Athletes will be able to go through Greenwich before passing over the Thames as they cross the Tower Bridge before going through central London. They will pass the Canary Wharf and famous landmarks such as the London Eye and Big Ben.

The athletes will then turn to Buckingham Palace, and follow a stretch of The Mall to reach the finish line.

Inside Ruto's Alleged Most Expensive Chopper(PHOTOS)