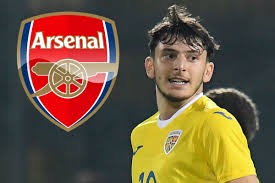 Arsenal have therefore opted to scout for players they need to sign in the January transfer market to fill the shoes of players who will be away for the African Cup of Nations.

Arsenal are also interested in signing Juventus winger Kulusevski to replace Aubameyang who will be away due to AFCON. Arsenal are said to have made contact with the player's agents and they are willing to trigger a massive £ 35 to Juventus for the player.

Arsenal have also made a bid for Stoica. The winger has potential and could be a perfect replacement for Nicolas Pepe who Arsenal want to get rid of after failing to impress. FCSB value Stoica at £ 10 plus 20% from any future transfer.

Arsenal are also in pole position to sign Karim Adeyemi of Red Bull Salzburg. Transfer expert Gianluca Di Marzio has told the player that Arsenal style of play suits the player which is different from FC Barcelona's who are also interested signing the youngster.