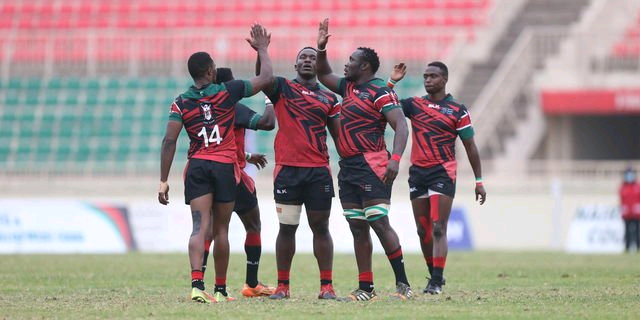 Kenya Simbas players celebrate their win against Zambia during their  2023 rugby World Cup qualifier at Nyayo National Stadium on July 11, 2021.

Kenya Rugby Union (KRU) Director of Rugby Thomas Odundo said that they are disappointed in the way the process was handled, which denied African countries to host their own qualifier.

Odundo said that the union put in their bid after successfully hosting several championships this year.

Other countries that had put in their bids for the competition were Zimbabwe and Namibia. The statement stated that a call for applications was sent to all African member federations of World Rugby as well as to France..

The statement said that the Rugby Africa commission reviewed the submissions in light of precise criteria to evaluate the offers. This enabled Rugby Africa’s Executive Committee to choose the host country for the Rugby Africa Cup 2022.

"We are not happy because they haven’t told us who the other countries which had bids. It’s even worse when they pick France when we are capable of hosting. In fact, we thought we were the front runners." said Odundo in a telephone interview.

Odundo said that they will review the development and give the way forward. In the qualifier that will feature the knockout format starting at the quarter-final, Kenya is up against Uganda.

The winner will sail to the semi-final where they will meet either Senegal or Algeria, who will play in the other quarter-final.

Zimbabwe and Burkina Faso will square it out in the other quarter-final with the winner setting up a semi-final duel against Zimbabwe or Cote dÍvoire.

Kenya, Madagascar and Senegal battled in the Barthes Cup held June 26 to July 11 where the host nation won.

Kenya played Senegal and Zambia in Pool “B” of the World Cup pre-qualifier on July 1-11. The hosts and Senegal sailed through to the last phase that will now be held in France.

Kenya played Madagascar in the Rugby Africa Women’s Cup. Kenya Lionesses lost 37-15 on aggregate; 27-15 and 10-0 to the visitors. Lionesses lost to Colombia 16-15 in the Women’s World Cup Repechege qualifier held on August 25.

All the matches were played at the Nyayo National Stadium. Khaled Babbou, Rugby Africa president said France is a great rugby nation, and France 2023 will be able to highlight Rugby Africa’s most important tournament to date.

"The well-being, health and safety of the players remained at the heart of the priorities. I want to thank France 2023 for his support as well as those who responded to the call for applications," said Babbou.

Babbou said France 2023 , who are in charge of organising Rugby World Cup 2023, promised to host a tournament of the highest international standards, whether it is the match stadium, hotels, security measures, health standards relating to Covid-19 or medical infrastructure available.

The winner will meet hosts France, New Zealand, Italy and the Americas 1 qualifier in Pool A during the 2023 Rugby World Cup.

Two chelsea players that can replace lukaku and Werner(opinion)

Place these four sure teams and win Big.